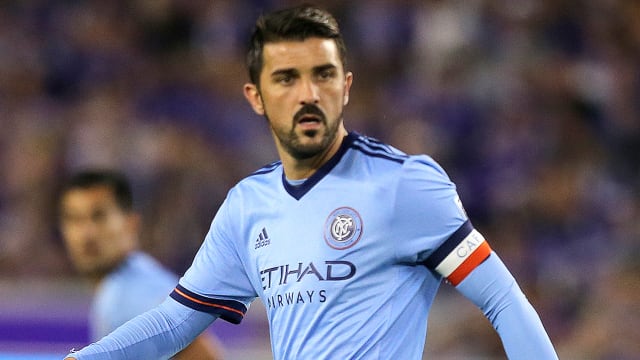 It was the David Villa show as New York City came from behind to earn bragging rights against neighbours New York Red Bulls, winning the Hudson River Derby 3-2.

Spain's all-time leading goalscorer Villa was the difference at a sold-out Yankee Stadium on Sunday, scoring a stunning hat-trick in the MLS blockbuster.

After featuring for the MLS All-Stars against Real Madrid during the week, former Barcelona star Villa returned to New York and continued his stellar season with the game's opening goal in the 28th minute.

Bradley Wright-Phillies threatened to steal the spotlight away from Villa when he equalised close to half-time and put the in-form Red Bulls ahead just past the hour-mark.

However, Villa led New York City's rally as he restored parity with a sensational solo goal with 18 minutes remaining.

.@Guaje7Villa's 16th goal of the year and the equalizer... #NYCFCpic.twitter.com/BgW35wJpCC

Villa then converted a 75th-minute penalty after a drawing a foul inside the area for his 17th goal of the campaign - snapping the Red Bulls' four-match winning streak.

.@Guaje7Villa for his first-ever #NYCFC hat-trick and the lead in the Hudson River Derby... #NYisBLUEpic.twitter.com/wm9z9uLWqA