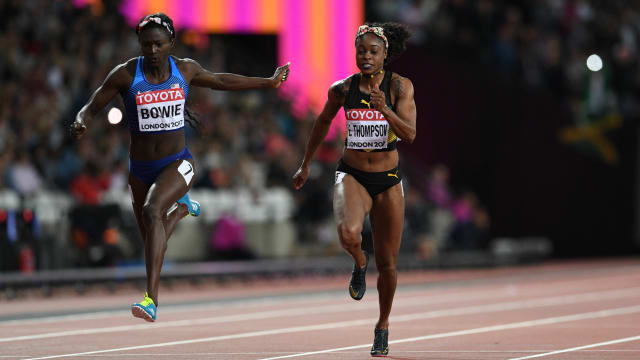 Elaine Thompson insists neither an upset stomach nor a hamstring problem were factors in her shock defeat in the final of the 100 metres at the IAAF World Championships on Sunday.

After qualifying fastest for Sunday's showpiece, Olympic champion Thompson finished fifth as Tori Bowie pipped Marie-Josee Ta Lou to gold in an extraordinary race, throwing herself across the line to win in 10.85 seconds, with Dafne Schippers claiming bronze.

Thompson did not recover from a poor start and a mid-race stumble, finishing fifth to complete a disappointing weekend for Jamaican sprint champions after Usain Bolt's shock defeat in the men's event.

But the double Rio 2016 gold medallist denied pre-race illness and a reported hamstring injury had influenced the result.

"I'm walking fine, my hamstring is great," Thompson told reporters. "I'm disappointed but I'll let it lift me and work harder. I have accomplished a lot last year and the year before.

"I actually threw up before I went out there, a few minutes before I went into the call room. I wouldn't say it affected me, I just didn't have a good race."

Thompson insisted Bolt's similarly surprising defeat did not contribute to her loss as she refused to make excuses for a below-par performance at London Stadium.

"[Bolt's loss] did not affect me - why would it affect me?" Thompson added. "I just do what I do best, come out here to do my job. My job wasn't done as well as I wanted tonight.

"It wasn't as I planned. You have to give those girls a lot of credit because I've been racing them all season and it was a tough field out there.

"I know I was the favourite and I'm disappointed but I'm happy as well because I'm healthy and I'm injury-free.

"Honestly, I don't know what happened, I just watched a replay, I stumbled and I tried to get it back and put in the performance that I wanted.

"The mission hasn't finished yet, I have a lot of races after this championship. This mission wasn't accomplished but it was a long season. I came out here brave and strong and ready to go but it didn't happen.

"I'll push even harder now. I have accomplished a lot last year and the year before."