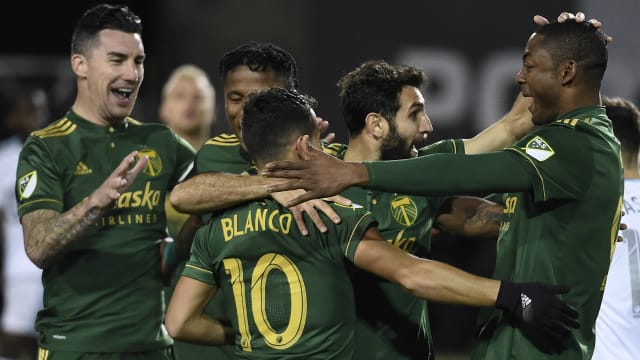 Liam Ridgewell, Diego Valeri and Alvas Powell all scored as the Timbers saw off the Galaxy 3-1 in Portland on Sunday.

The Timbers made a dream start thanks to Ridgewell's fifth-minute opener - a power header into an empty net - but LA hit back immediately via Emmanuel Boateng.

Valeri restored Portland's lead just past the half-hour mark with a stunning long-range strike and Powell sealed the points when he lashed a shot across Galaxy goalkeeper Brian Rowe.

Goals, goals goals. We like goals. Full highlights from our 3-1 win over LA: https://t.co/g2yp22szc6#RCTID#PORvLAGpic.twitter.com/u4zLIBP0jU

The Timbers are fifth in the Western Conference - three points adrift of leaders Sporting KC - while the Galaxy are ninth and nine points outside of the play-off positions.

Sporting KC missed the opportunity to extend their lead atop the conference after being held to a 1-1 draw by visiting Atlanta.

Benny Feilhaber's 59th-minute penalty had Sporting KC on track for back-to-back wins until Jacob Peterson's netted a last-gasp equaliser as the hosts played out their fourth draw in five matches.