It is best not to play Everton target Sigurdsson, says Clement 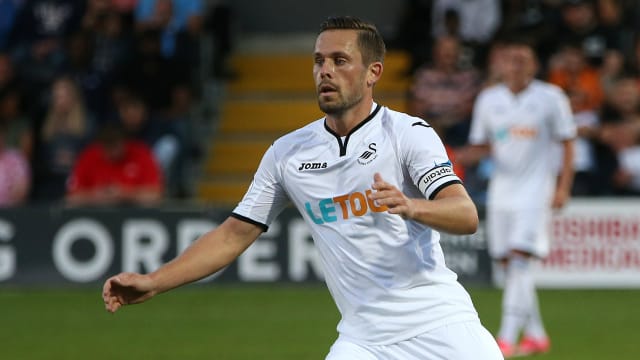 Swansea City boss Paul Clement says it is best not to play Gylfi Sigurdsson, although there is still no update on the attacking midfielder's potential move to Everton.

Sigurdsson has not played since Swansea's opening pre-season game against Barnet on July 12, after which he missed the club's tour to the United States as he was "not feeling in the right frame of mind".

He was again missing for the Premier League side's impressive 4-0 victory over Sampdoria at the Liberty Stadium on Saturday, their last friendly ahead of the new season.

Swansea are reportedly holding out for a £50million fee for Sigurdsson, with Everton seen as frontrunners in the race to sign him, with Leicester City also in the mix.

"No change since we last spoke - all parties would like it resolved," Clement said to Sky Sports.

"But my focus is on the players I'm working with and getting ready for the season.

"And it is best for everyone that he doesn't play in these [pre-season] games.

"But he is training every day with the squad and if the situation changes he is going to be ready for us."

A positive finish to pre-season.

Swansea's transfer business is on hold until the Sigurdsson situation has been resolved.

Asked about a return for Wilfried Bony, Clement said: "I have seen that name linked, but until we get the current situation organised, then nothing's going to happen.

"So, there is no point discussing the speculation about him or any other players we've been linked with."

Swansea begin their top-flight campaign away to Southampton next Saturday, but Fernando Llorente, who continues to be linked with Chelsea, will be missing with a broken arm.

"I have heard that rumour every day since I joined Swansea," Clement said of the Blues' reported Llorente pursuit.

"He is recovering from the broken arm he suffered on holiday, he's working hard to play for us and he was a key player for us last season.

"Without his goals last season the situation could have been different. We need him fit and ready."