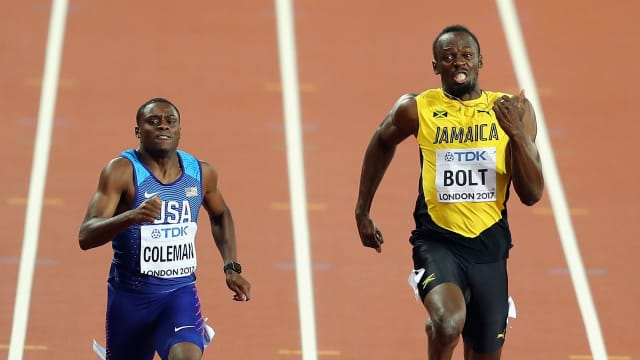 Christian Coleman felt Usain Bolt was "vulnerable" in the 100 metres at the IAAF World Championships but still aspires to reach the Jamaican icon's level.

Eight-time Olympic champion Bolt had to settle for bronze in the final individual race of his illustrious career, with Coleman beating him to silver and Justin Gatlin taking the gold.

The 21-year-old American entered his first Championships as the 100m world leader and beat Bolt in both the semi-final and Saturday's showpiece.

With the Jamaican's season best of 9.95secs - repeated in the final - a far cry from the world record he set in Berlin 2009, Coleman was confident the older man was ripe to be upstaged.

Coleman exclusively told Omnisport on Sunday: "I had confidence in myself. [Bolt's] not necessarily in the prime of his career right now. [When] he was back breaking records and setting the world records... that was crazy.

"I don't necessarily think I'm [at] that level right now in my career - I can certainly get there - but the level he's at right now, I knew he was vulnerable.

"I had confidence in myself. I just had to go out and put my best foot forward and compete."

Gatlin may have been the victor, but he knelt at Bolt's feet at the conclusion of the final in a show of the utmost respect, a gesture Coleman felt was testament to the Jamaican's enduring class.

"Bolt's the greatest of all time. I think you saw that because Gatlin bowed down to him," said Coleman.

"Gatlin got the gold but Bolt has been a great competitor for years now. He's been somebody who took the sport to a whole new level and just to be on the line with him, that was a humbling experience. For me, it was a blessing to be a part of that historic race."

But did Coleman feel bad about contributing to Bolt having to bow out of the 100m without what would have been a record-breaking fourth World Championship gold in the event? Of course not.

"As a competitor, and he's a competitor as well and he knew I was going to come out and just try to win and that's what you want," he explained.

"You want somebody who's going to push you and not just give you the race and I feel like he knew he was going to have to work to try to win, just like any other championship.

"I don't think he was expecting anyone to just give it to him and I definitely wasn't. I was just going out and trying to win. I was happy to be a part of history."