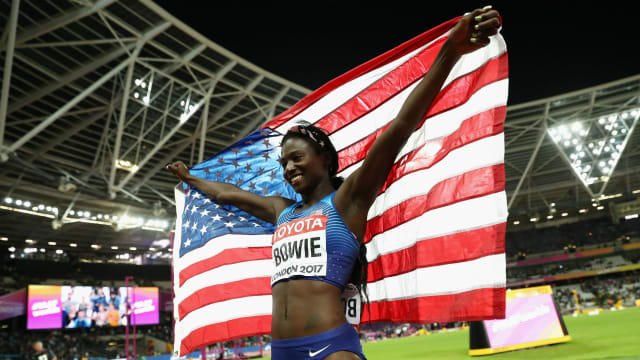 Tori Bowie stole the show with a phenomenal finish in the IAAF Women's Championships women's 100 metres final, while Wayde van Niekerk was almost on the end of an upset in his 400m semi-final.

American Bowie followed the lead of compatriot Justin Gatlin by triumphing in a tense 100m finale on Sunday, while there was extreme disappointment for Olympic champion Elaine Thompson as she missed out on a medal.

World-record holder Van Niekerk has been in cruise control so far at the Championships and he was given a run for his money in the semi-finals.

The build-up to the women's 100m final was largely billed as Thompson v Schippers, but Bowie tore up the script - although the Jamaican contributed too.

Bowie flung herself across the line to edge out Marie-Josee Ta Lou by a hundredth of a second with a season's best time of 10.85s, adding gold to her Beijing 2015 bronze and Rio 2016 silver.

for Bowie
for Ta Lou
for Schippers #IAAFworldspic.twitter.com/zfRnK1Xljw

Thompson was the champion in Brazil and was expected to claim the world title at London Stadium, but she paid the price for a clumsy getaway and finished fifth.

Speaking to the media after the race, she denied sustaining an injury or suffering from illness, saying: "I'm walking fine, my hamstring is great.

"I actually threw up before I went out there, a few minutes before I went into the call room. I wouldn't say it affected me, I just didn't have a good race."

Van Niekerk is expected to do nothing less than retain his 400m world title in London and he stepped up significantly from the heats.

However, he had to push back past Baboloki Thebe in his semi-final to go through with a time of 44.22s.

"Every time we get on the track it seems as though we go to break 44 seconds. It is good competition but it just means I always have to be on my game," said Van Niekerk.

Steven Gardiner was the only man to go below 44 seconds as he clocked a new national record for the Bahamas at 43.89, while Isaac Makwala looks primed to challenge after winning the final semi-final.

It was far from a convincing final heptathlon event for Nafissatou Thiam as she finished last in the 800m heat, but with Carolin Schafer only finishing 6.08s ahead of her it was enough to take gold by 88 points.

In adding the world title to the Olympic crown she took from Jessica Ennis-Hill last year in Rio, the Belgian established herself as the dominant force in the sport, but she envisages difficulties on the horizon.

"It was a really difficult year, with a lot of pressure but I managed to produce a great performance," said Thiam.

"The thing with sport is, it doesn't always pay off when you work hard and you're never really sure if you're going to produce something great. I'm doing great things at the moment but I know hard times are going to come at some point, they do for everyone."

Greek pole vaulter Ekaterini Stefanidi claimed the gold medal to add to the European and Olympic titles she already holds with a comprehensive victory.

Clearing 4.82m at the first attempt proved enough for gold as American Sandi Morris could only vault 4.75m for silver, with bronze going to Venezuela's Robeilys Peinado, who claimed a national record of 4.65m.

Stefanidi went on to set a new Greek record by vaulting 4.91m - recording the best clearance in the world this year - although she then failed with three ambitious attempts at 5.02.