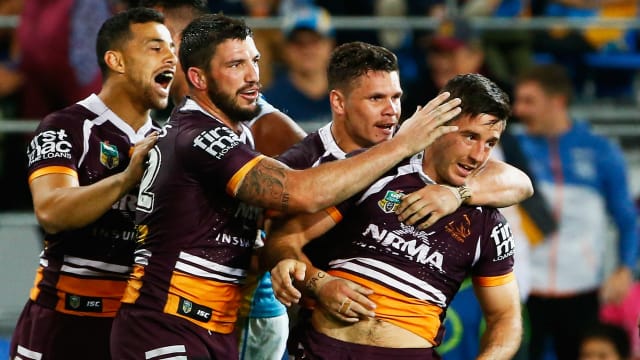 McCullough will miss the rest of the NRL season after undergoing knee surgery last week and his replacement at hooker shone in their biggest win over the Titans.

A 16-0 lead at the break quickly began to grow after the restart as Hunt doubled his tally on 48 minutes, the 27-year-old completing his treble five minutes after the hour.

Scores from James Roberts, Anthony Milford, Josh McGuire and second tries for Oates and Nikorima completed the rout over a Titans side who lost Ash Taylor to a knee problem.

Hear from Ben Hunt after his outstanding performance in #NRLTitansBroncos!#NRLpic.twitter.com/zWfKKbaZi6

The win lifts the Broncos to third in the table just ahead of Cronulla Sharks, who also have 30 points.

Cronulla missed the chance to hold onto third as they were comfortably beaten 30-12 by Canberra Raiders - the latter moving within two points of the top eight.

Despite falling 8-0 down the Raiders finished the first half well on top thanks to tries from Josh Papalii, Josh Hodgson and a double from Jordan Rapana.

Their 24-8 lead proved decisive as Jarrod Croker added three penalties in the second half to wrap up the win after Gerard Beale had given the Sharks hope.

The @RaidersCanberra keep their season alive with win over the @Cronulla_Sharks!#NRLSharksRaiders#NRLpic.twitter.com/iDjkjqJabH

New Zealand Warriors' miserable form showed no sign of coming to an end as they succumbed to a revitalised Newcastle Knights.

The Knights may have endured a disappointing season but Saturday's 26-10 triumph was the first time since 2015 they have recorded back-to-back victories.

The @NRLKnights secure back-to-back wins for the first time since 2015!#NRLKnightsWarriors#NRLpic.twitter.com/sHvUGCihTJ

Brock Lamb capped off an starring role with a late try as the Warriors slipped to a fifth defeat in-a-row, leaving their Finals hopes clinging by a thread.