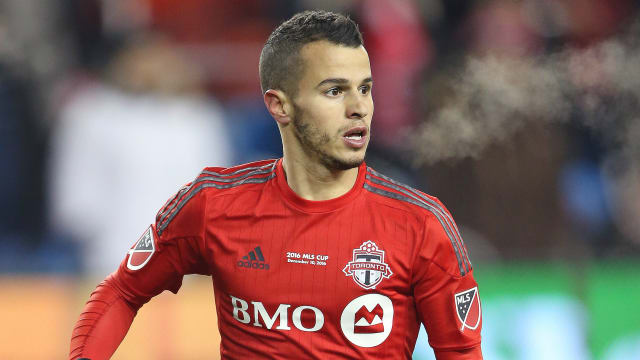 Sebastian Giovinco scored a high-quality brace as Toronto battered New York City 4-0 to strengthen their position atop the Eastern Conference.

Giovinco put Toronto ahead after 32 minutes in Sunday's MLS clash, the striker shifting the ball on to his left foot and bending a superb 25-yard strike out of goalkeeper Sean Johnson's reach.

And the former Italy international doubled Toronto's lead with his 50th goal for the club after half-time, converting a free-kick he won himself.

Giovinco stepped up to bend a terrific set-piece into Johnson's top-right corner, scoring a record 10th direct free-kick in MLS matches, with the goalkeeper again left helpless in the face of the forward's fantastic finishing.

There it is! The big for our #10. Congrats, Seba!#TFCLive | #TORvNYCpic.twitter.com/vukFKrNpnZ

Jozy Altidore added a third from the penalty spot, bludgeoning home from 12 yards after the United States international was fouled by Alexander Callens to extend Toronto's unbeaten home run this year to 11 MLS matches.

Giovinco turned provider to set up Raheem Edwards for a late fourth, the 22-year-old scoring his first MLS goal, and New York's misery was compounded when Maxi Moralez blazed an injury-time penalty over the crossbar.