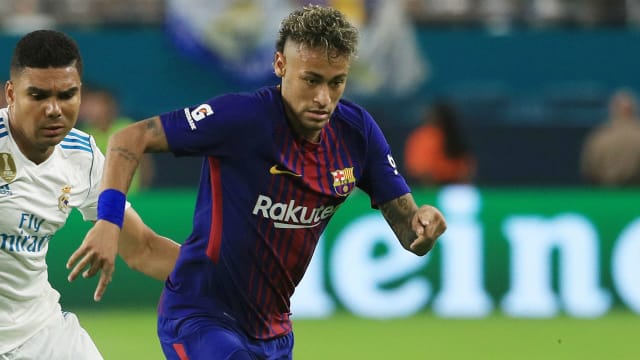 Neymar is reported to be close to a EUR222million transfer to PSG, but had a hand in two goals for Barca in their thrilling 3-2 win over Real Madrid in the International Champions Cup in Miami on Saturday.

Stars from across the sporting spectrum were out in force for the game in Florida, and Neymar met up with a host of big names following Barca's success.

Among those to exchange pleasantries with him was Floyd Mayweather, and Neymar made no secret as to where his allegiance lies ahead of the unbeaten boxing legend's blockbuster fight with UFC star Conor McGregor next month.

Tiger Woods was also in attendance and the 14-time major champion donned a Barca shirt for his snap with Neymar, as did Golden State Warriors forward Draymond Green - who has seemingly spent much time partying with the Brazilian since winning the NBA title.

Green was joined by fellow basketball starts Carmelo Anthony and DeMarcus Cousins for a group snap but may soon have to trade his Blaugrana jersey for a PSG one if the most sensational transfer of the window goes through.