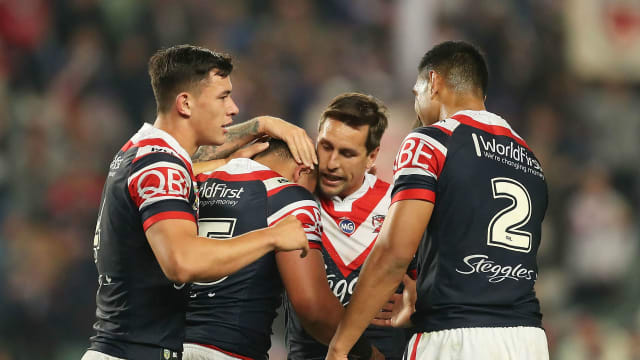 Sydney Roosters joined Melbourne Storm on top of the NRL table on Saturday after scoring 16 unanswered second-half points to secure a 22-16 victory over North Queensland Cowboys.

Having taken an early lead through Latrell Mitchell's 60-metre try, the Roosters found themselves 16-6 down at the break as the Cowboys applied intense pressure in the attacking third.

Kane Linnett and Kyle Feldt put them ahead before Coen Hess' score was controversially awarded by referee Grant Atkins, the TMO unable to find sufficient evidence to overturn the on-field official's decision.

What the Roosters felt was an injustice appeared to be the catalyst they needed and after the restart they dominated the match and claimed a big win thanks to tries from Daniel Tupou, Sio Siua Taukeiaho and Luke Keary.

The @sydneyroosters hold on and secure their spot in the Top 2! #NRLRoostersCowboys#NRLpic.twitter.com/EXpTi3BWqG

Canberra Raiders boosted their top-eight hopes with a convincing 32-18 victory over the struggling South Sydney Rabbitohs, a fourth successive defeat for the Bunnies.

The Raiders know they must finish the season strongly if they are to make up a four-point deficit on the Finals places, and Saturday's win at ANZ Stadium was just the start they needed.

Jarrod Croker was inspirational for the visitors as he kicked all six attempts at goal and scored his 105th try for the club, moving him level with Brett Mullins and only behind namesake Jason Croker on 120.

Canberra crossed five times to get back to winning ways, while the Rabbitohs will rue another scrappy display that saw skipper Sam Burgess leave the field with a rib injury.

Full Time! We come away from ANZ Stadium with a 32-18 win over @SSFCRABBITOHS. #NRLSouthsRaiders#BleedGreenpic.twitter.com/UDFQW0tTLC

A 21-14 win saw the Knights end their eight-game losing streak and dent the Dragons' attempts to cling on to a top-eight slot.

Tries from Brock Lamb, Shaun Kenny-Dowall and Jacob Saifiti secured the third win of the season for Newcastle, with Trent Hodkinson adding three conversions, a penalty and a late drop goal.