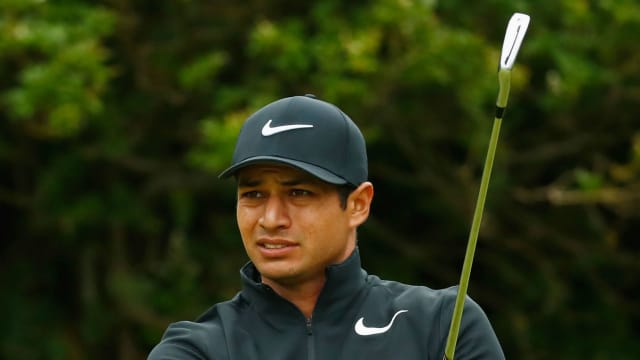 Julian Suri mounted a late surge in his first round at the European Open, birdieing four of the last five holes to join Richard McEvoy at the top of the leaderboard.

After an uninspiring front nine that included two birdies and a bogey, Suri turned it up a notch on the way home to join Englishman McEvoy on six under at Green Eagle Golf Course in Hamburg.

McEvoy's 66 looked set to be enough for a solo overnight lead, but world number 220 Suri capped a tremendous back nine with his seventh birdie of the day at the last.

However, defending champion Alexander Levy, Charl Schwartzel, Stuart Manley and Chris Paisley form of a four-man group who sit just one shot back.

McEvoy notched six birdies, three of which came on par-five holes and the last following important par saves on the fifth and sixth, and was pleased with how his day went.

"I'm very pleased. At the start of the week [I thought] it's not really my style of golf course to be honest," McEvoy told the European Tour.

A bogey-free 66 gives the Englishman the early #PEO17 lead. pic.twitter.com/FX45qyP8xO

"It's wet out there and I'm not the longest of hitters, I'm quite average on tour, but I did everything kind of right today.

"When I got myself in trouble I got out of it well and I took advantage of the holes where I was hitting wedges in, so a very pleasing start."

While Suri's late charge was impressive, Levy's went one better. The Frenchman was level par through 12 but stepped up a gear and birdied five of his last six holes, finishing with four in succession.

Schwartzel may have been left wondering what might have been after his approach to the par-five ninth - his last - hit the flag for albatross before landing 25 feet from the cup. After failing to sink a putt for eagle to join McEvoy at the summit, he had to settle for a birdie.

Patrick Reed is one of nine players who sit two shots off the pace, while Max Kieffer and Marcel Siem are the highest ranked Germans following three-under 69s.