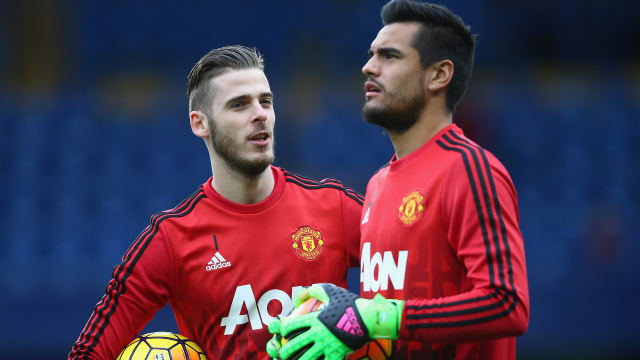 De Gea is undoubtedly the first-choice shot-stopper at United, having made 35 Premier League starts last season.

But the Spain international is consistently linked with Madrid, the club he almost joined in August 2015.

While a De Gea exit would likely give Romero more opportunities, the Argentina goalkeeper said he wanted his team-mate to stay.

"It's better for the club that there is this competition there between me and David," he told UK newspapers.

"The truth is that there exists a great friendship between us, we work hard in order help each other out.

"It's very important that we work in this way so we can get the most out of each other. If he puts pressure on me, I put pressure on him and it's the same with Joel [Pereira] who is working with us.

"Yes, it's good for me [if he stays]. He is a friend and we will keep working hard to help each other out in training.

"If he does well then I do well, so in that way, the level of performance will always be high."

Romero, who joined United in 2015, signed a four-year deal with the club earlier in July.

The 30-year-old made 18 appearances in all competitions last season, including 12 in United's run to the Europa League title, and admitted he was unsure how much game time he would receive in 2017-18.

"I don't know what is going to happen," Romero said.

"We will get to know before each match who is going to start as normal, but we will work hard and the minutes that I get, I will try to take advantage of them."