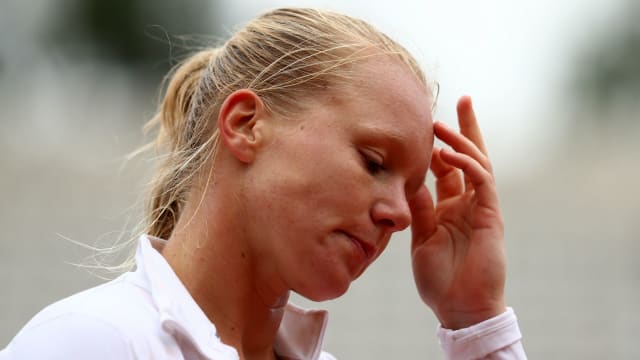 There will be no back-to-back titles for Kiki Bertens after the injured sixth seed handed Barbara Krejcikova a walkover in the Ericsson Open, while Lu Jing-Jing beat Jelena Jankovic to reach the quarter-finals of the Jiangxi Open.

Bertens claimed her fourth WTA singles title in Gstaad last weekend, but the world number 26 pulled out of the clay-court tournament in Bastad on Thursday due to an unspecified injury.

Krejcikova will face Caroline Garcia in the last eight and top seed Caroline Wozniacki will come up against Kateryna Kozlova after defeating Viktorija Golubic 6-2 2-6 6-4.

Wozniacki lost her way in the second set after bossing the first and battled back from 2-0 down in a decider which was in the balance until the Dane broke when Golubic served to stay in the match.

Elise Mertens ousted fiifth seed Carla Suarez Navarro before Kozlova saw off Barthel, though the Ukrainian required two attempts to serve out a 6-3 6-3 victory after a rain delay.

Former world number one Jankovic went tumbling out in Nanchang as the 272-ranked Lu fought back to win 2-6 6-1 6-2 in searing heat.

Lu was outplayed in the first set, but Jankovic needed a medical timeout in the second as she struggled on a baking hot day and the Chinese outsider took advantage to reach the quarter-finals for the first time.

Kristyna Pliskova retired due to a hand injury when leading Nao Hibino 3-0 in the first set, prior to Peng Shuai also advancing when Tereza Martincova was unable to continue in their second-round match.

Wang Yafan and Zhu Lin sealed progress in their homeland.