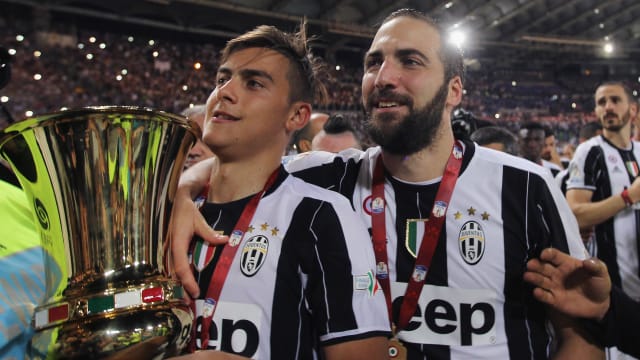 Juventus striker Gonzalo Higuain is eager for Paulo Dybala to snub interest from Barcelona but admits that he "can't point a gun at his head and tell him to stay".

Dybala has been linked with a move to Camp Nou as a replacement for Neymar, should the Brazil star complete a world-record EUR222million switch to Paris Saint-Germain.

Higuain, who spent six years in LaLiga with Real Madrid, understands the attraction of joining one of the country's top clubs but insists that his team-mate would be better served by staying in Turin.

"Dybala is at a delicate age," he told La Gazzetta dello Sport. "I went to Real Madrid at 19 and I was there until I was 25, but I was at an important club for a long time.

"Everyone wants to play with great players and I can't point a gun at his head and tell him to stay. Everyone should do what makes them happy, just like he is here. We all want him to stay.

"Last year we were convinced we could win [the Champions League] and we got to the final; this year will be tougher because other teams have strengthened.

"He shouldn't just stay to win the Champions League, but for the seventh Scudetto and a fourth Coppa Italia in a row. If we then get that particular trophy, so much the better.

"He's been at Juve for two years, he has consistency here. He's young, he's very happy here, the club and the fans all love him, as do we, and Juve helped him grow.

"Paulo will know what's best for him to do."

Juve have already suffered the loss of a high-profile first-team star, with centre-back Leonardo Bonucci having made a shock move to AC Milan.

Higuain is confident his side can cope without the Italy international, though, and has warned his old team-mate that he will not prevent him from scoring.

"Bonucci helped Juve to win for many years," said the Argentina forward. "Now he's gone to a direct rival but we are still very strong. We have the players to make sure we won't feel his absence.

"Bonucci will be hungry but we will have the same determination to try to win a seventh title in a row. When he plays against me, I'll score."