Neymar 'would be welcome' at Real Madrid, jokes Casemiro 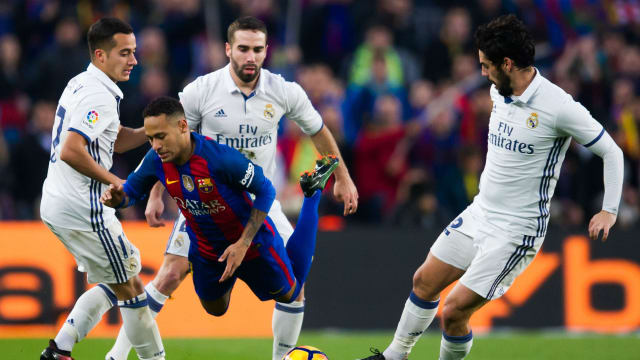 Neymar "would be welcome" at Real Madrid, midfielder Casemiro has cheekily suggested, as the Barcelona star continues to be linked with a money-spinning Camp Nou exit.

Paris Saint-Germain are reportedly keen to pay the Brazil striker's EUR222million buyout clause, with reports in Neymar's homeland suggesting he is receptive about a move to Ligue 1, where he would be the league and team's biggest star.

Gerard Pique attempted to add a definitive air to the rumour's end, by posting "He's staying" along with a picture of Neymar on social media on Sunday.

However, Casemiro may well have added more fuel to the fire, by suggesting that his international colleague could find a home at the Santiago Bernabeu.

He told Globo: "Neymar will tell you his future. He knows what he has to do."

The defensive midfielder devilishly added: "Why not come and play at Real Madrid? Here he would be welcome."

An attempt to break out of the shadow of Lionel Messi is thought to be behind Neymar's wishes to leave and Casemiro expects his compatriot to come to a decision that benefits his long-term ambitions.

"I have not talked to Neymar lately, but I wish him well," he added.

"If he leaves Barcelona I wish him all the luck in the world, and if he stays, then I do too.

"Neymar is very important for the selection of Brazil, we always have his good football."