Draymond Green, Conor McGregor get into spat on Instagram over Warriors jersey 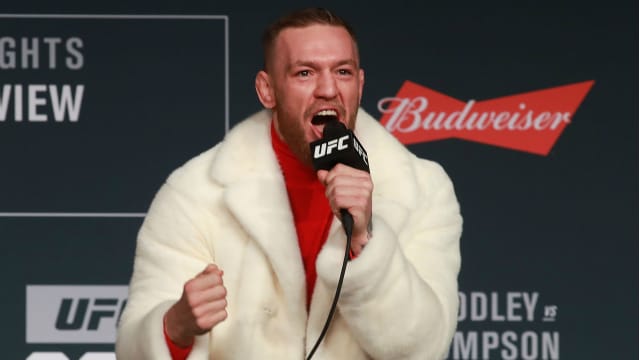 Draymond Green made his allegiance to Floyd Mayweather Jr clear when he called out Conor McGregor on Sunday.

A picture emerged of McGregor wearing a number 23 Golden State Warriors jersey, which happens to be Green's number, and the NBA champion and Defensive Player of the Year was not happy about it.

"We rocking with Floyd bro not you ... take that off bruh," Green wrote on Instagram, tagging McGregor.

Never one to back down from an altercation, McGregor snapped back in Green's comments, saying the jersey belonged to former Warrior C.J. Watson.

"That's C.J Watson mate. I don't know who the f*** you are. No disrespect tho kid, keep hustling and stay in school," McGregor posted.

We rocking with Floyd bro not you... take that off bruh @thenotoriousmma

But McGregor didn't stop there. He posted another comment that said, "Now ask yourself why am I rocking C.J. when I don't know or give a f*** about basketball. I dribble heads on the floor. Not a ball. This is no game here, kid."

Keen to have the last word, Green responded: "Hahahahaha that number won't be worn again when I'm finished with it clown! Gold medalist, NBA champ, all star, DPOY etc!!! Hahahaha stop it boy! Nate Diaz (Bay Area stand up) whooped you in your ring! Money May about to destroy you!!! Take that Warrior jersey off bruh you're an incredible internet troll we don't rock with you! Go train bum!

Boxing legend Mayweather and UFC superstar McGregor will settle their spat in the ring on August 26 in Las Vegas.