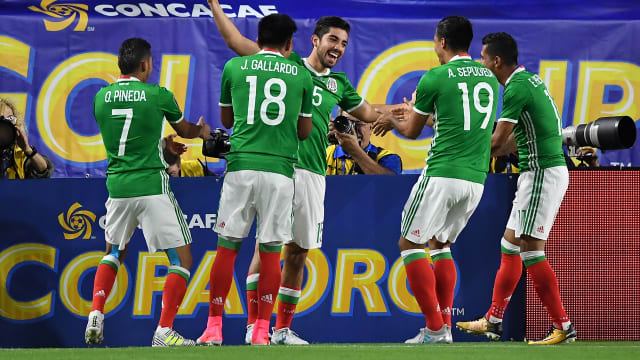 Mexico advanced to yet another CONCACAF Gold Cup semi-final after edging Honduras 1-0 on Thursday.

An early goal from Rodolfo Pizarro was all Mexico needed in the quarter-final at the University of Phoenix Stadium, setting up a last-four clash with Jamaica.

Pizarro tapped in at the back post in the fourth minute as the defending champions reached the Gold Cup semis for the sixth consecutive time.

It was once more far from convincing for Mexico, who have coach Juan Carlos Osorio serving a ban and several stars absent after the Confederations Cup.

But the early goal was enough, with Honduras - who reached the last eight as the best third-placed team despite failing to score in the group stage - rarely threatening.

Once again, Mexico were much-changed, with seven players making way from the starting XI that overcame Curacao last time out. Elias Hernandez, Hugo Ayala and Pizarro were among those named to start.

Jorge Luis Pinto made just two changes to the Honduras side that drew with Canada, as Ever Alvarado and Bryan Acosta came in for Jorge Claros and Carlos Discua.

Mexico made a lively start and they took a fourth-minute lead.

Jesus Duenas received the ball on the left side of the area and, perhaps shooting at goal, his effort went across the face, Hernandez maybe getting a touch before Pizarro side-footed in at the back post.

As the tackles from Honduras flew in, Mexico continued to look the more likely, and Jesus Molina fired over the bar in the 29th minute.

Honduras, pegged back in their own half for most of the opening 45 minutes, went close shortly after the break.

Romell Quioto's free-kick from distance forced Jose Corona into a low save before Mexico cleared the danger.

There was finally some spark about Honduras in the second half, with Carlos Lanza forcing a straightforward save from Corona in the 54th minute.

Corona was needed to punch a corner off his line at the near post with 12 minutes remaining as Honduras pushed for an equaliser.

However, despite a much-improved performance after the break, Honduras were unable to find an equaliser, Alfredo Mejia squandering their last chance when he fired agonisingly wide in the 92nd minute.