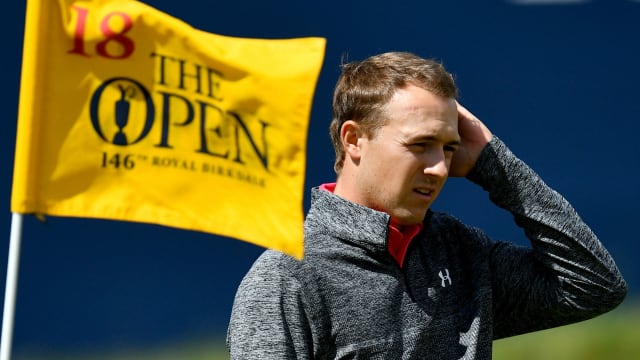 Day one of the 146th Open Championship began with a woeful eight from Mark O'Meara, but ended with Jordan Spieth, Brooks Koepka and Matt Kuchar having fulfilled the veteran's prediction that a 65 was possible on Thursday at Royal Birkdale.

After starting in miserable conditions at 6:35am local time and signing for an 81 as the weather gradually improved, O'Meara - the 1998 champion at this venue - said: "There will be decent scores. I wouldn't be surprised if somebody shoots three or four, maybe even five under today."

Spieth and Koepka were able to hit the latter target as the best of the early starters, while Kuchar turned in 29 before recording nine pars on the way home to complete a three-way tie at the top.

The American trio finished the opening round one clear of Paul Casey and Charl Schwartzel, the latter coming home in 32 after being level par at the turn. Rory McIlroy, playing alongside Schwartzel and world number one Dustin Johnson (71), matched the South African's back nine to end the day one over despite five bogeys in his first six holes.

Two-time major champion Spieth rated his performance as "a nine across the board", having stayed bogey-free as excellent par saves at the 10th and 16th complemented gains on the second, eighth, ninth, 14th and 17th holes.

Like Spieth, the winner of last month's Travelers Championship, Koepka came into this event having won on his previous start, albeit some five weeks ago as he secured a maiden major title with victory at Erin Hills.

The U.S. Open champion surged to the top of the leaderboard with three birdies in succession from the 11th and then followed his only dropped shot of the day at 16 by holing a bunker shot for eagle on the penultimate hole.

Kuchar's sparkling front nine suggested an even lower score was in the offing, particularly with the morning's gloom having given way to glorious sunshine on England's north-west coast, but the 39-year-old had to settle for matching Spieth and Koepka's admirable efforts.

It's all stars and stripes at the top of the leaderboard after round 1. #TheOpenhttps://t.co/ZBw1iLNgeApic.twitter.com/v2sjOqQAY3

The only other man to reach five under was Charley Hoffman, who began his round with a sensational eagle at the difficult opening hole that O'Meara quadruple-bogeyed.

Hoffman held a share of the lead with three holes to play, only to drop shots at 16 and 17, leaving him two back alongside the likes of Rafael Cabrera-Bello, Justin Thomas and Ian Poulter - the runner-up to Padraig Harrington when Birkdale last hosted The Open nine years ago.

World number two Hideki Matsuyama and Alex Noren were among those three off the pace, while Henrik Stenson began his title defence with a solid 69 and Jon Rahm was also one under after a ruling saw him avoid a penalty on the 17th.

Masters champion Sergio Garcia could only shoot 73 - the same score as Phil Mickelson - despite finishing with back-to-back birdies. Harrington was another notable name at three over, one better off through the first 18 holes than when he won at Birkdale in 2008.

Trickier conditions are expected for Friday's second round, with stronger winds and afternoon rain likely to have a significant impact.