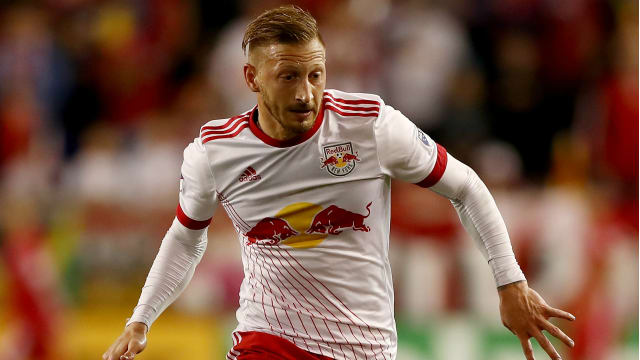 The Red Bulls made light work of the Earthquakes on Wednesday, Austrian winger Daniel Royer scoring twice at the death to heap further misery on the visitors.

Sacha Kljestan and Felipe Martins put the result beyond doubt with goals in the 73rd and 75th minutes.

The Earthquakes managed to pull a goal back thanks to substitute Valeri Qazaishvili with two minutes of normal time remaining.

But the Red Bulls had the final say, Royer netting a fourth from a tight angle in the 90th minute before sealing the rout a minute later.

Royer sneaks it in the near post for #RBNY's fourth. #NYvSJhttps://t.co/KXzp5OvV7J

The Red Bulls are fifth in the Eastern Conference, 10 points adrift of leaders Toronto FC, who salvaged a last-gasp 2-2 draw at New York City.

But Victor Vazquez successfully converted a penalty in the first minute of stoppage time to earn a share of the points for the Canadian visitors.

The Sounders came from 3-0 down to trump lowly DC United 4-3 in Seattle - the first team in MLS history to erase a three-goal deficit and win in regulation time.

But the Sounders scored four goals in 27 minutes, including a 78th-minute winner, to complete a sensational comeback.

After pushing Manchester United in a 2-1 friendly loss on Monday, Real Salt Lake - who finished with 10 men - eased past nine-man Portland Timbers 4-1.