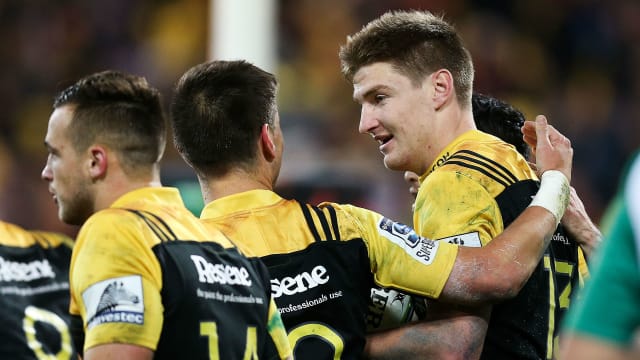 Jordie Barrett starred as Hurricanes shattered Crusaders' unbeaten Super Rugby record with a 31-22 win in Wellington to set up a quarter-final against Brumbies after Sunwolves claimed an historic victory over Bulls.

Crusaders had won all 14 matches before making the trip to Westpac Stadium, but they came unstuck in the final match of the regular season, giving Lions the chance to finish top of the table if they beat Sharks later on Saturday.

It had all started so well for the Christchurch-based franchise as they opened up a 12-0 advantage after 17 minutes courtesy of a Seta Tamanivalu double.

The defending champions suffered a blow when Beauden Barrett who ruled out due to illness, but younger brother Jordie was outstanding and reduced the deficit with a first-half try which he converted.

Hurricanes went ahead five minutes after the break when Julian Savea crossed after knocking a loose ball backwards, but Richie Mo'unga's boot put Crusaders back in front and Israel Dagg evaded New Zealand team-mate Barrett for a try that Mo'unga converted to make it 22-14 midway through the second half.

The Canes were not finished yet, though, Wes Goosen and Vaea Fifita dotting down in the space of seven minutes and Barrett taking his tally for the night to 14 from the tee to ensure Chris Boyd's men will travel to Canberra for a last-eight encounter next week.

Timothy Lafaele scored a hat-trick on a memorable night for Sunwolves, who stunned Blues with an eight-try 48-21 triumph in Tokyo.

Captain Willie Britz led by example for the Japanese side as they won a first Super Rugby encounter against opponents from New Zealand.

Chiefs will travel for a quarter-final against Stormers on the back of a 28-10 win over Brumbies, Damian McKenzie scoring a try as well as slotting over three penalties and two conversions.

Long-serving Western Force captain Matt Hodgson ended his career on a high note, scoring a penalty with the last kick of the game after also claiming one of five tries for his side in a 40-11 rout of Waratahs on a wet evening in Perth.

WHAT A WIN FROM THE ROAD SAFETY WESTERN FORCE!

WHAT A WAY TO SEND OUT CLUB LEGEND MATT HODGSON! pic.twitter.com/FV8hAUQYUx