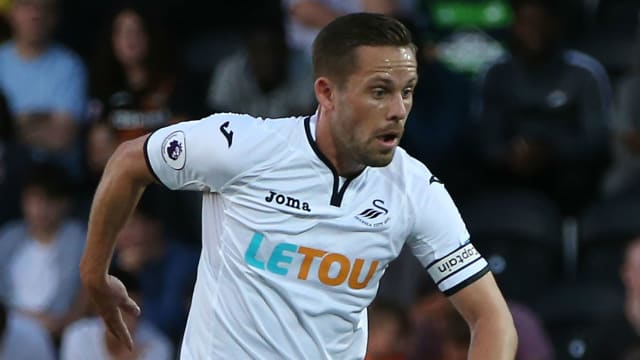 Gylfi Sigurdsson will miss Swansea City's tour of the United States after the Welsh club announced he did "not feel in the right frame of mind to travel due to the current uncertainty over his future."

The Iceland midfielder is the subject of reported interest from Leicester City and Everton, having scored nine Premier League goals and contributed 13 assists last season to help Paul Clement's men stay in the top flight.

Sigurdsson's exploits have not gone unnoticed and Swansea are looking to receive up to £50million for a player they signed from Tottenham in July 2014 in a deal that saw Ben Davies and Michel Vorm move the other way.

Clement had praised Sigurdsson's professionalism following the 1-0 pre-season defeat at Barnet on Wednesday but he will be without the 27-year-old for the trip to the States.

The club tweeted on Thursday: "We can confirm that Gylfi Sigurdsson will not travel with the squad for our pre-season tour of the USA.

"Having played v Barnet last night, Gylfi did not feel in the right frame of mind to travel due to the current uncertainty over his future."

We can confirm that Gylfi Sigurdsson will not travel with the squad for our pre-season tour of the USA. pic.twitter.com/8qgAQewUG3

Having played v Barnet last night, Gylfi did not feel in the right frame of mind to travel due to the current uncertainty over his future.

Talking after the game at Barnet, Clement hinted he may lose his star man for financial reasons.

He told BBC Sport: "I have made it very clear I want him to stay here.

"The fans want that, the owners would like that but, ultimately, there's a business side to football as well.

"We had that situation with Jack Cork. In the summer there was no thought of moving Jack on but it got to a point when another club came in with a really good offer.

"That might end up being the case with Gylfi. We don't know yet."

In a separate interview with Sky Sports, the former Chelsea, Real Madrid and Bayern Munich coach added: "I know there is a lot of speculation and clubs that are strongly interested in him, but there's nothing more than that at the moment.

"We have not rejected anything and Gylfi has not come to us and said, 'I want to leave'.

"He is a player here at the moment. We are not sure whether he is going to be here for this season. If another club comes up with the right valuation, according to us, then it would be a different matter possibly."

Swansea, who have brought in Erwin Mulder, Tammy Abraham and Roque Mesa in the transfer window, want the matter to be dealt with swiftly.

"The sooner the better," said Clement. "You don't want to be in a situation where it's dragging on through July and all through August, when the season's started, with the situation not being resolved.

"He's one of our most valuable players. He showed that last season with his goals and his assists, and he was instrumental in us maintaining our Premier League status.

"I don't know how people are going to behave in the future. I know the kind of character I worked with last year - someone who's very professional.

"He's come back, he's got his head down and he's doing his work, so I hope that continues."