'Money' Mayweather and McGregor continued their promotional tour, although their latest efforts failed to reach the lofty standards they set in Toronto and Los Angeles.

But the American did at least contribute to quite the image, showering McGregor with money during the news conference. 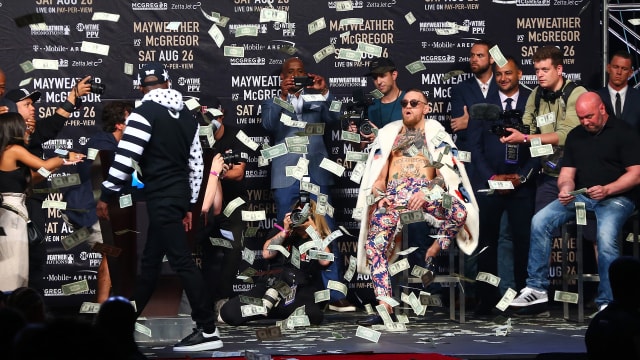 "They're all $1s. Where's the real money at?" - @TheNotoriousMMA#MayMacWorldTourpic.twitter.com/ZkAzeISvRo

Both fighters may be tiring as they continue to promote their highly anticipated fight on August 26.

With three appearances in as many days and one to come - in London on Friday - it is easy to see why, particularly after plenty of fireworks a day earlier in Canada.

Three cities down, one to go on #MayMacWorldTour! Who has the edge so far? pic.twitter.com/akkr3IbP1B