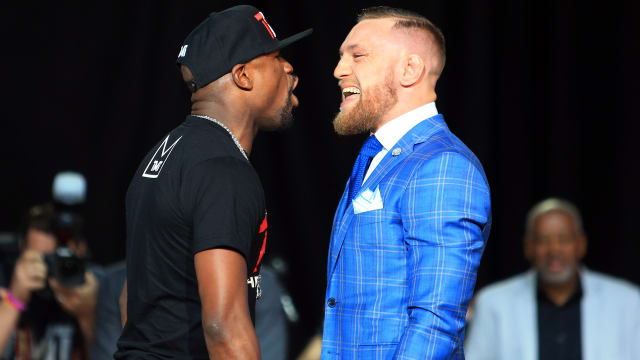 Floyd Mayweather Jr. and Conor McGregor again exchanged taunts, and expletives, as their tour headed to Toronto on Wednesday.

Mayweather, 40, and McGregor once again delivered outside the ring as their promotional tour continued.

It was the second public appearance in two days for the pair ahead of their highly anticipated August 26 fight in Las Vegas.

The duo once again faced off, as they did in Los Angeles a day earlier, and UFC star McGregor was undoubtedly the more popular.

Mayweather, who is putting his 49-0 record on the line, at one stage grabbed an Irish flag from the stage before posing with it.

"You do something with that flag, I'll f*** you up," McGregor said.

McGregor grabbed Mayweather's bag in response, laughing about its contents - he estimated $5,000 - or lack thereof.

The flag or the bag? @FloydMayweather vs. @TheNotoriousMMA!#MayMacWorldTourpic.twitter.com/4NMtNna9WD

You know obviously these these two had to link up @Drake & @TheNotoriousMMA#MayMacWorldTourpic.twitter.com/QNlAc9dKZR

"There is nothing they can do to faze me, 28 years of age. I'm getting fight cheques and promoter cheques," McGregor said.

"When Floyd was 28 he was on Oscar De la Hoya's undercard and that's just facts."

Mayweather, who talked up "being at the top" for 21 years, dared McGregor to bet his entire cheque on the fight.

NO SLEEP 'TIL BROOKLYN!! #MayMacWorldTourpic.twitter.com/7YsV6fOwjA

The battle continues in New York City on Thursday.