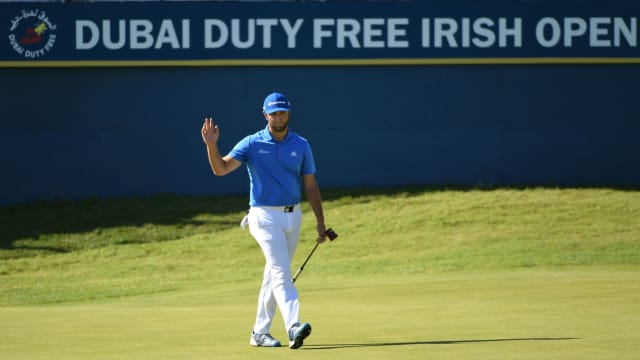 Jon Rahm produced another stellar round to win the Irish Open by six shots on Sunday, rounding off a fantastic week with a maiden European Tour title.

A 65 on the fourth day at Portstewart took Rahm to 24-under for the tournament, leaving him well clear of closest challengers Richie Ramsay and Matthew Southgate.

It could have been even better for Rahm, who bogeyed two of the last three holes in challenging conditions on the Northern Irish coast.

The Spaniard had come into the final day with a share of the lead but saw Daniel Im's challenge fade on Sunday, the American rounding the course in 72 to finish with a share of fourth.

David Drysdale produced the best round of the week - a 63 including seven successive birdies to finish - to draw level with Im, Justin Rose and Ryan Fox.

Ramsay, Drysdale and Fox earned places at The Open with their performances.

But the day belonged to Rahm, who holed from 150 yards on the fourth for an eagle that spurred him on to a score that is the lowest total to par in the tournament's history by three shots.

The 22-year-old had to answer questions from officials relating to the placement of his ball on the sixth green, but he was cleared of any wrongdoing as he followed in the footsteps of Spanish greats Seve Ballesteros, Jose Maria Olazabal and Sergio Garcia as winners of the Irish Open.

"It really is special for me to be able to share it with three of my heroes.

"It's something that I was saying at the beginning of the week would be hard to explain and, right now, it still seems unreal.

"I'll probably realise in the next four or five days, but right now it's still kind of unbelievable."

"It feels amazing to be a @EuropeanTour winner!" pic.twitter.com/V2fINCITHs