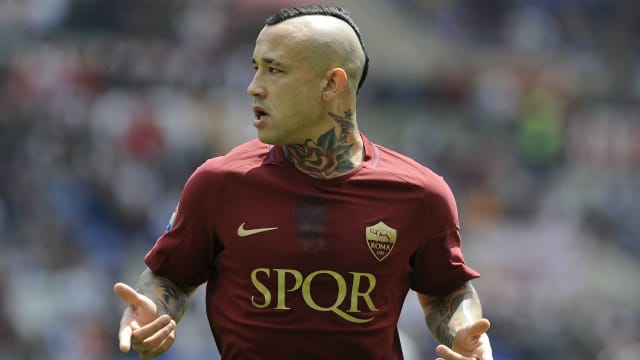 Radja Nainggolan will "definitely" stay at Roma as part of the club's plans to build a competitive squad for next season, sporting director Monchi has said.

The Belgium international is a reported target for Inter and Manchester United, with the Premier League club said to be willing to pay around £40million for the midfielder.

Roma fans have made clear their frustrations around the club's transfer policy, with Mohamed Salah and Leandro Paredes sold and Antonio Rudiger tipped to complete a move to Chelsea.

However, Monchi is adamant that no more first-team players will be moved on and is confident that Roma will have a strong side by the time the transfer window closes at the end of August.

"Nainggolan will definitely stay at Roma," he told a news conference. "The time of selling important players is over. Now we build a team with the options that the market provides.

"One of the objectives we are working on is a winger and we'll try to get that done as quickly as possible. I prefer to wait and bring in the player I really want, rather than to act hastily."

Kostas Manolas continues to be linked with a move to Zenit but Monchi does not want their defensive options to become any weaker.

"We want one more centre-back, without anyone else leaving," he said. "A team is built not on July 1, but at the end of August. Once the transfer window closes, we'll have a very good squad. We are building a team capable of fighting and being competitive."

However, the former Sevilla director confessed that Roma's pursuit of forward Gregoire Defrel has been complicated by Sassuolo's asking price.

"We're a long way off," he said. "We are trying for a player with a similar profile to ours, but he is not the only option.

"We had a meeting with Sassuolo but we want to pay the right price. We have no intention of paying over the odds for a player."