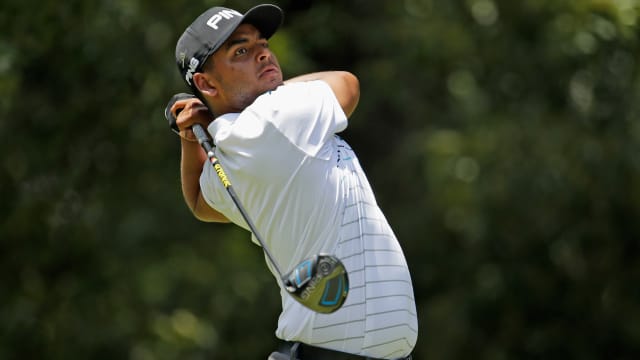 Sebastian Munoz carded a stunning nine-under 61 to take a two-shot lead at the Greenbrier Classic on Thursday.

The 24-year-old Colombian holed 10 birdies in his opening round in White Sulphur Springs, West Virginia.

Munoz sits at nine under and clear atop the leaderboard, with Davis Love III (63) outright second at the PGA Tour event, which was cancelled last year due to flooding.

A group of six players are tied for third at six under, including David Lingmerth, Xander Schauffele and 2015 champion Danny Lee.

But it was Munoz who starred, making four straight birdies from holes two through five and another at the seventh.

After another at the 10th, he bogeyed the 13th, only to respond with another run of four consecutive birdies beginning at 14.

What a round by Sebastian Muñoz.

Love, the 53-year-old who won the 1997 US PGA Championship, is also in contention after a bogey-free round.

Lingmerth, coming off a tied for fifth at the Quicken Loans National, made three birdies on his final four holes to join the group at six under.

Schauffele, who tied for fifth at the U.S. Open, holed five birdies on the back nine in his fine opening round.

C.T. Pan, David Hearn, Hudson Swafford and Robert Streb are at five under.

World number 21 Patrick Reed opened with a 66 and is a shot ahead of Phil Mickelson, who had brother Tim as his caddie in his first tournament since parting ways with Jim 'Bones' Mackay.