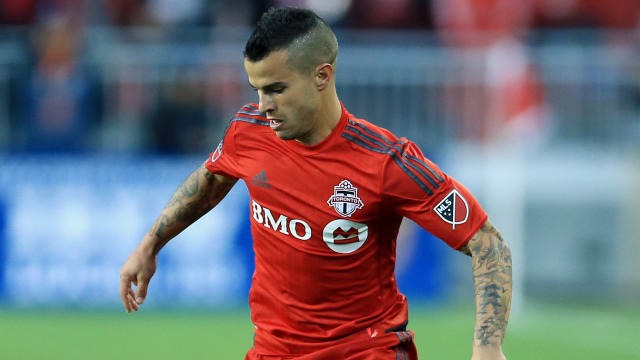 Sebastian Giovinco was at his brilliant best in Toronto FC's victory at Orlando City, while David Villa was unable to prevent defeat for New York City.

Former Juventus forward Giovinco scored twice, including a stunning second-half free-kick, and set up another as Toronto upstaged Orlando 3-1 in MLS on Wednesday.

High-flying Toronto made a fine start away at Orlando City Stadium, United States international Jozy Altidore breaking the deadlock in the 18th minute.

Toronto doubled their lead within a minute of the second half when Altidore turned provider, this time unselfishly squaring the ball to Giovinco.

Kaka assisted Carlos Rivas just past the hour-mark as fifth-placed Orlando pulled a goal back but Giovinco's set-piece in the 65th minute sealed the points.

Toronto are now level on points with Chicago Fire atop the Eastern Conference following the latter's 2-2 draw at Portland Timbers.

Villa put New York - third in the east - ahead from the penalty spot in the 40th minute after Maxime Chanot cancelled out Fredy Montero's early opener.

HT: @Guaje7Villa calmly slots home the penalty to give @NYCFC two goals in six minutes and the lead.#VANvNYChttps://t.co/SiAS26N6WK

However, the Whitecaps scored two unanswered goals in the second half to snap New York's four-game winning streak.