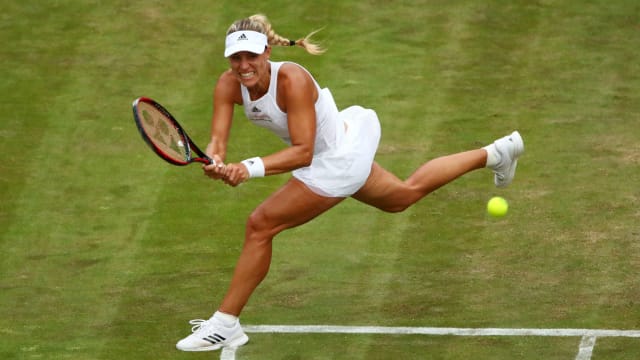 Top seed Angelique Kerber fought back from a first-set scare to see off the threat of Kirsten Flipkens in the second round of Wimbledon.

The world number one, who has been in patchy form this year and was a losing finalist at the All England Club in 2016, triumphed 7-5 6-4 on Thursday.

Flipkens, ranked 88th, will be left to rue a missed opportunity after fluffing her lines when serving for the first set.

The Belgian, a semi-finalist in 2013, showed some excellent variety to put her opponent under pressure, but proved too inconsistent to make a sustained challenge, and Kerber safely negotiated her way to victory to book a third-round meeting with Shelby Rogers.

No problems for Angelique Kerber...

The No.1 seed books her place in the third round with a 7-5, 7-5 win over Kirsten Flipkens. #Wimbledonpic.twitter.com/Umhxlhmplf

Kerber was the first to blink in the match as Flipkens mixed up some powerful baseline hitting with a series of well-disguised drop shots to force a break in game six.

But the underdog's fluency abandoned her at the start of the next game and Kerber immediately hit back.

Flipkens' response was swift and emphatic as she teed up the chance to serve for the set at 5-3, one of her deft shots at the net drawing a look of disbelief from Kerber.

However, there was a fourth consecutive break in store as a scrappy Flipkens service game ended with a wild double fault.

The turnaround was complete when Kerber broke for 6-5 and avoided making the same mistake as her opponent, taking out the set with a fourth game on the spin.

Flipkens stopped the rot with a confident hold to start the second set, before seeing an excellent opening pass her by when Kerber produced a precise passing shot on break point.

When another break opportunity went begging, Flipkens may have sensed it was not to be her day and she was broken herself to trail 3-2 before digging deep to level it up when Kerber served for the match.

Having done so well to keep her hopes alive, Flipkens was then broken and Kerber finally got the job done in the next game.