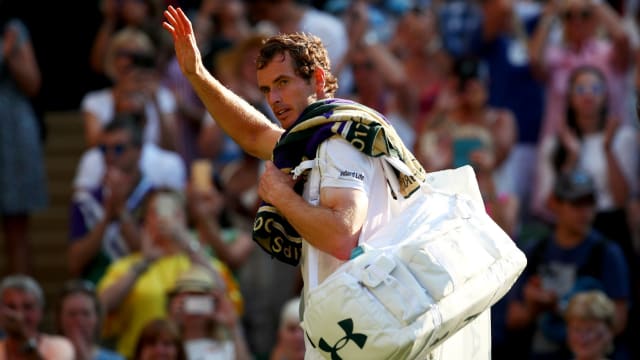 Defending champion Andy Murray sauntered into the third round of Wimbledon with an emphatic straight-sets victory over the flamboyant Dustin Brown.

The world number one showed no signs that he is being troubled by a hip problem which was a concern ahead of the tournament, coasting to a 6-3 6-2 6-2 win on Centre Court.

Brown lived up to his reputation as a great entertainer, but his casual approach made life far too easy for the top seed, who needed only an hour and 36 minutes to set up a meeting with Fabio Fognini.

Murray lost only 14 points on serve and returned superbly, while the attacking Brown, who raced to the net at every opportunity, never looked like pulling off a repeat of his shock triumph over Rafael Nadal on the same court two years ago.

The third round awaits the defending champion, Andy Murray...#Wimbledonpic.twitter.com/ONgWaLHJu7

The two put on a show of thrilling cat-and-mouse rallies, with an array of drop shots and lobs, but the professional Murray ground his enigmatic opponent down on a warm day at SW19.

Murray moved freely throughout and was gifted a first break when unpredictable German Brown double-faulted, enabling the Briton to serve out the first set in 35 minutes.

Brown showed flashes of remarkable athleticism, but his decision-making left a lot to be desired and the world number 97 could only stick his thumb up and applaud after a sublime backhand winner and a sumptuous lob from Murray in a game which he won to break at 3-2 in the second set.

The outsider's laid-back approach proved to be costly when he tamely prodded a forehand into the net after great defence from Murray to trail 5-2 and the title-holder held to love to open up a two-set advantage.

Murray broke again to lead 2-1 in the third as Brown ran out of steam in the hunt, going a double break down as he wilted on the big stage and guiding a tame forehand into the net to bow out.