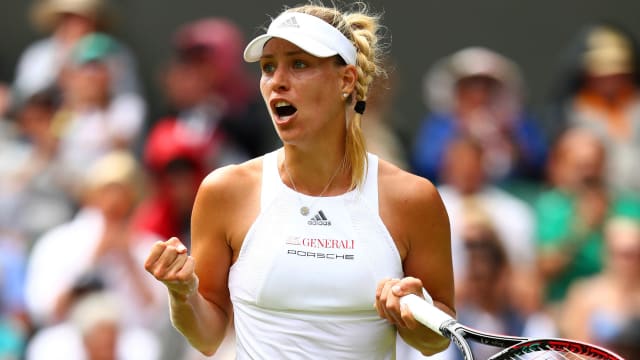 Angelique Kerber had to dig deep to see off a spirited display from Irina Falconi and take her place in the second round of Wimbledon on Tuesday.

The German has struggled for momentum in 2017 but showed glimpses of the form that saw her reach the final in 2016 with a 6-4 6-4 victory on Centre Court - her 50th grass-court win.

It was far from plain sailing for Kerber, though, as Falconi grew into the encounter and applied plenty of pressure onto her opponent's service games.

Kerber - who has failed to get past the fourth round in either of the previous grand slams in 2017 - just had enough to keep her opponent at bay, and moves into a second-round clash with Kirsten Flipkens.

Two early breaks quickly gave Kerber a 3-0 lead but Falconi was not in any rush to end her appearance on Wimbledon's iconic show court and battled back.

A string of perfectly placed lobs and drop shots got the crowd on their feet, while a number of impressive forehand passing shots kept Kerber on her toes.

Having saved a break point on her serve in the eighth game, Kerber showed no problems two games later to serve out for the set and a 1-0 lead.

The second set was no easier for the 29-year-old but the rhythm slowly began to return and she was able to take advantage of openings that came her way.

A break in the ninth game gave Kerber the chance to serve out for the match and, after two unforced Falconi errors, she wrapped up her progression with a crisp forehand winner.