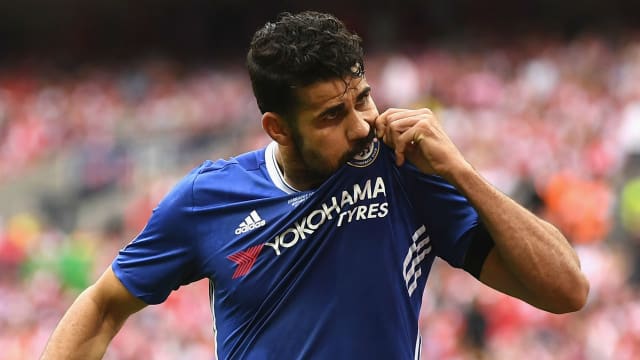 Chelsea would suffer a "very big loss" if they were to sell Diego Costa ahead of the new season, according to Pedro.

The former Barcelona forward, a team-mate of Costa for club and country, is dreading the prospect of the striker's departure amid reports linking him to an Atletico Madrid return, a switch complicated by a transfer ban for Diego Simeone's side.

Manager Antonio Conte informed the 28-year-old by text that he is not in the club's plans for 2017-18, despite scoring 20 Premier League goals and providing seven assists as Chelsea celebrated title glory.

AC Milan have also been linked with a swoop for Costa, while reports of interest from the Chinese Super League continue even though the Spain international has said he does not want to move there as it would damage his hopes of World Cup selection.

But Pedro, who insists Chelsea's players do not know what Costa's situation is, thinks the best place for him is Stamford Bridge.

"We will see what happens to Diego, but we don't know," Pedro told Cadena Ser of Costa, who has two years left to run on his contract.

"He is obviously a very important player in attack for us. He has scored the majority of the goals for us this season. He is a player feared by defenders because he is fast. He scores with ease.

"Diego gives you an added strength and more so in this league, because he is strong, he scores and he has good physical condition.

"If eventually it is confirmed that he will not continue with us, it will be a very big loss for us.

"It is early days, but I hope as a player and friend that he can stay with us."

Everton star Romelu Lukaku has been strongly linked with a return to Chelsea as a potential replacement for Costa.

Pedro knows Chelsea's squad will be pushed to the limit in Conte's second year, with Champions League football back after their domestic success last season.

He continued: "We hope to have another great year. We know it is going to be a very demanding season, more complicated as we will be competing in the Champions League.

"To compete in four competitions, including the Champions League, which is a very prestigious and challenging competition, will be a stern test and so will it be to defend the league title.

"We are going to work very hard. Conte has been able to create a group, build a strong and solid team, and in the end, we have reaped the rewards.

"His tactical work has given us the added strength. He has united the changing room so that we can all go together as one."