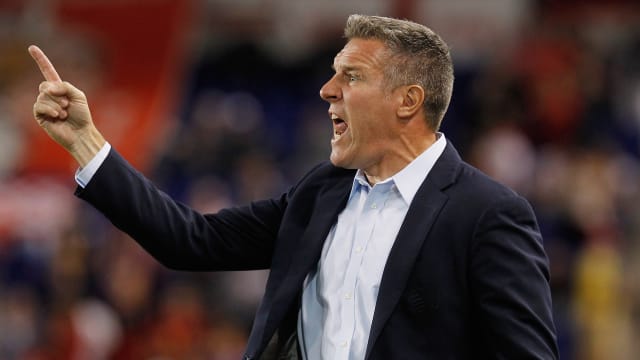 Sporting Kansas City pulled clear atop the Western Conference in MLS thanks to an Ike Opara stunner, while David Accam scored a hat-trick for Chicago Fire.

Roger Espinoza and Opara were on the scoresheet as Sporting claimed a 2-1 win against LA Galaxy on Saturday.

Espinoza struck from distance in the 22nd minute, Galaxy goalkeeper Clement Diop punching the effort into his own net.

Then came Opara's brilliant goal as the centre-back delivered with a bicycle kick to put his team 2-0 up.

Get on your bike, Ike!

David Romney pulled a goal back in the second half for Galaxy, but Sporting held on to move five points clear atop the conference.

The Ghanaian opened the scoring in style just three minutes in, his sublime backheel from a Matt Polster cross beating goalkeeper Joe Bendik.

Accam made it 2-0 just five minutes later, getting on the end of a Bastian Schweinsteiger pass before rounding Bendik and finishing.

MLS top goalscorer Nemanja Nikolic struck early in the second half before Accam completed his hat-trick, and the resounding win, from the penalty spot.

David Accam was on another level tonight. pic.twitter.com/kFhYWtBC9f

New York City claimed derby bragging rights with a 2-0 win over the Red Bulls thanks to goals from Jack Harrison and Ben Sweat.

Philadelphia Union overcame DC United 1-0 thanks to a Fabrice Picault goal, but there was controversy at Talen Energy Stadium.

DC midfielder Luciano Acosta had been shown a red card after a tangle in the 74th minute, but it was stunningly rescinded moments later.

Just four minutes earlier, United's Lamar Neagle was denied from the penalty spot as the hosts claimed their win.

Federico Higuain scored a brace as the Columbus Crew proved too good for the Montreal Impact 4-1.

Atlanta United recorded a 1-0 victory over the Colorado Rapids, Minnesota United and the Vancouver Whitecaps drew 2-2 and a 10-man San Jose Earthquakes held on to beat Real Salt Lake 2-1.