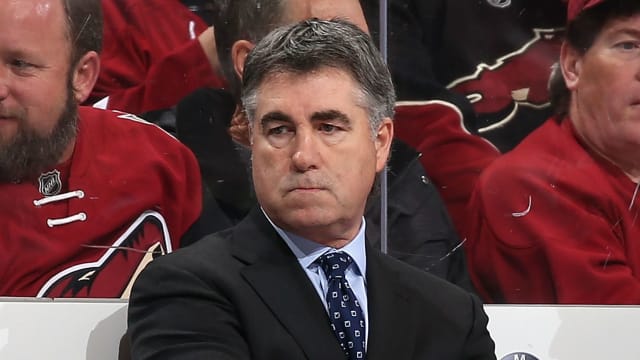 Hired in 2009, Tippett was the second-longest tenured coach in the NHL and one of its most respected minds.

His ouster came three days after the Coyotes said they would not extend a contract offer to fan favourite and captain Shane Doan, who had been with the franchise since it arrived in Arizona in 1997.

The controversial decisions to part with Tippett and Doan are among the first made under Andrew Barroway, who became the Coyotes' sole owner on June 12.

In Tippett's case, Barroway cited "philosophical differences" as a reason for change on the bench.

"On behalf of the entire Coyotes organisation, I would like to sincerely thank Tip for all of his hard work and the many contributions he made to our organisation," Barroway said in a statement late Thursday, the eve of the NHL Draft.

"Tip is a man of high character and we are very grateful for his leadership during his tenure as our head coach.

"Ultimately, we have some philosophical differences on how to build our team. Therefore, we mutually agreed that it is in everyone's best interest to have a coaching change in order to move our franchise forward."

Barroway added that the search to replace Tippett will begin immediately.

"After some thoughtful discussions with Andy, we both agreed that it was best for me to move on," Tippett said in a statement through the team. "I have thoroughly enjoyed my time with the Coyotes and wish Andy and the entire organisation all the best in the future."

In his nine seasons with the Coyotes, Tippett went 282-257-83, including the franchise's only first-place finish and a Western Conference finals berth in 2011-12.

But the Coyotes have missed the playoffs in five consecutive seasons since that run and had begun the process of getting rid of veterans like Doan in favour of more youthful talent.