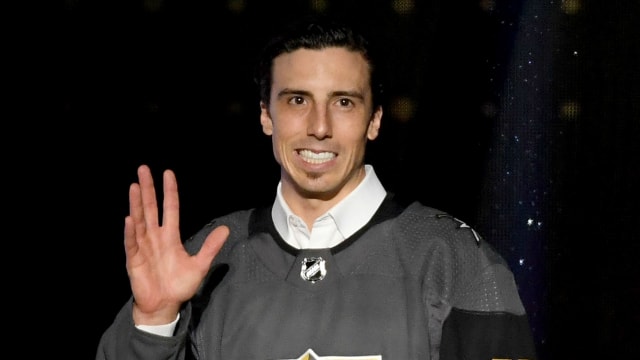 If the Vegas Golden Knights were to uncover a franchise face among 30 other teams, the obvious choice was Marc-Andre Fleury.

Toward the end of the NHL's awards show and expansion draft on Wednesday, it was the now-former Pittsburgh Penguins goaltender who drew the largest ovation from the crowd at T Mobile Arena when his name was announced as Vegas' 29th pick.

Indeed, Fleury, long beloved by fans in Pittsburgh, instantly becomes the Knights' most marketable player as the franchise set out to fill seats in a new market.

That much was evident by the reception.

"I'm not looking to be the face of much," he told reporters after the fanfare settled. "I didn't expect the ovation. "It was so crazy. We're really excited to get this started."

The 32-year-old is the only active goalie in the NHL to have won three Stanley Cups, and he will bring his 375-216-66 career record to a team that has a chance to be competitive in their inaugural season.

Universally lauded as the consummate team-mate, he waived his no-movement clause months ago then helped the Penguins win a second straight championship, knowing full well the end to his 14-year run in Pittsburgh was imminent.

That is the sort of selflessness that prompted sombre farewells and well-wishes from team-mates past and present as soon as Fleury was "knighted."

First Penguins captain Sidney Crosby admitted he was weirded out seeing new colours on Fleury. Then a frowning Evgeni Malkin took to Instagram, sharing a photo wearing Fleury's number 29 jersey and the words "My hero" inscribed on the back captioned: "Sad day :("

The Penguins' official Twitter account added a flower emoji to their handle, an ode to Fleury's nickname.

Fleury's era in Pittsburgh has come to an end: https://t.co/Pig64ggBbFpic.twitter.com/cL8S02Rn53

All of this is to say no player selected Wednesday will be more missed by his former team than Fleury, even if he had been the most telegraphed pick of the bunch.

Yet Fleury, with a smile on his face all night long, seems to be moving on all right. Asked what he's looking forward to most when he meets the Penguins for the first time, his response was telling.

"I just want to beat them. That's it," Fleury said.