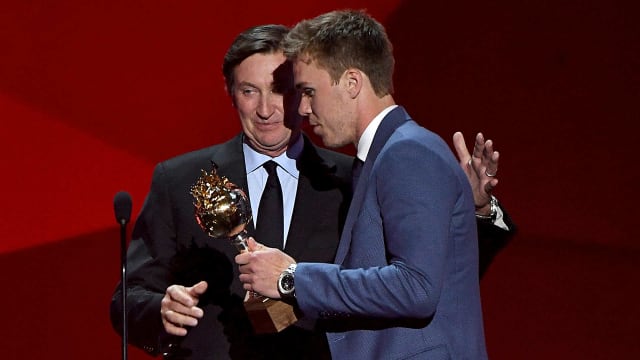 Connor McDavid has long been pegged as the future face of the NHL, but Wednesday was his coronation.

Capping a season in which the 20-year-old sensation became the youngest captain in history and led the NHL in scoring, the Oilers star won the Hart Trophy as the league's most valuable player by a landslide.

McDavid's league-leading 100 points were 11 more than Crosby in second. He also took home the Ted Lindsay Award, for the league's MVP as voted on by players - following in the footsteps of the latter, who won his first Hart as a 19-year-old in 2007.

Wayne Gretzky is the youngest player to win the Hart. He was six months younger than Crosby in 1980. Thus, it was symbolic that the 'great one' passed the trophy along to McDavid while the Penguins skipper looked on.

Among the other award winners were John Tortorella of the Blue Jackets for Coach of the Year, while Toronto Maple Leafs star Auston Matthews was crowned Top Rookie.