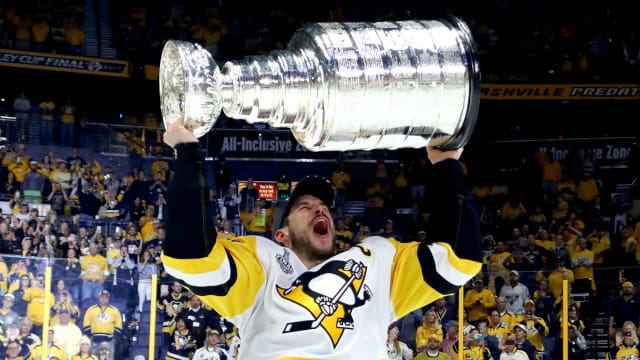 It was a little more than a calendar year ago people wondered: Would Sidney Crosby ever add the Conn Smythe to his trophy case? Now he has two.

In leading the Pittsburgh Penguins to back-to-back NHL Stanley Cup championships -- clinched Sunday with a 2-0 game-six win over the Nashville Predators -- Crosby was named MVP of the playoffs for a second time in as many years, only adding to his already accomplished legacy.

The Penguins captain is the sixth player in NHL history with two career Conn Smythe trophies.

Though Crosby did not record a point in Sunday's clincher, he had seven for the series, including three assists in Thursday's game five that will serve as yet another defining performance for the world's consensus top player.

His 27 playoff points were second only to team-mate Evgeni Malkin, who won the Conn Smythe in 2009.

Along the way, Crosby, hoisting his third Cup in four trips, passed Lemieux for the most career points by a Penguins player in a Final series.

The latest Conn Smythe caps a regular season in which Crosby scored an NHL-leading 44 goals and logged the 1,000th point of his career.