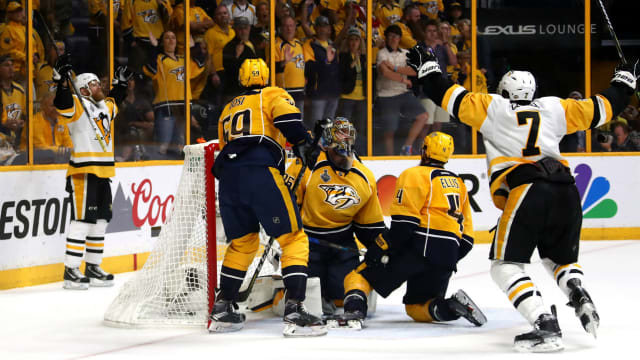 The NHL has a repeat Stanley Cup champion for the first time in its modern era courtesy of the Pittsburgh Penguins.

Patric Hornqvist scored with less than two minutes remaining in a wild, controversial game six on Sunday as the Penguins hung on in Nashville to become the first team in 19 years to win back-to-back.

Hornqvist, a one-time Nashville Predator, skated just 9:15 -- second-lowest among Penguins forwards -- but found himself in the right place at the right time to knock a friendly bounce off the end boards inside the near post, just past Pekka Rinne's left arm.

Carl Hagelin broke away and showed his patented burst to score an empty net goal as the Predators pulled Rinne in a last-ditch effort to force game seven, sealing the 2-0 win and 4-2 series triumph for yet another Pittsburgh title.

In doing so, the Penguins improved to 5-0 in road-game clinchers all time, an unprecedented mark in NHL history.

Matt Murray's play was the story of the game. The 23-year-old netminder made 27 saves for his second consecutive shutout.

A painstakingly quick whistle cost the Predators what would have been the opening goal -- and the eventual equaliser.

With 1:05 gone in the second period, a Filip Forsberg rebound trickled behind goalie Murray and settled in the crease of a yawning Penguins net. Predators centre Colton Sissons lunged forward, knocking the puck across the goal line for what appeared to be the first goal by either team.

It turned out, though, that referee Kevin Pollock thought Murray had frozen the puck and prematurely whistled the play dead a split second before Sissons could capitalise.