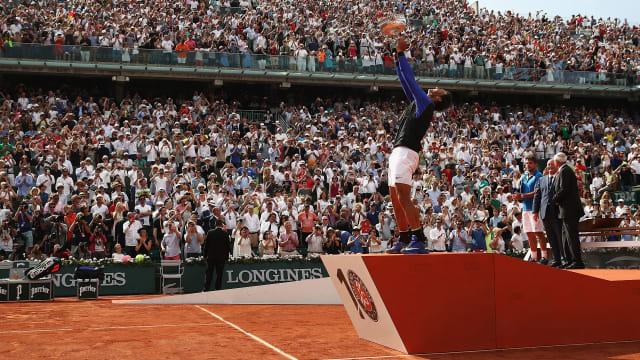 Rafael Nadal's supreme performance as he claimed a historic 10th French Open title led to some of the biggest names in tennis paying tribute to the undisputed 'King of Clay'.

The Spaniard thrashed a helpless Stan Wawrinka 6-2 6-3 6-1 to lift the Coupe des Mousquetaires for the first time since 2014 at Roland Garros on Sunday. He is now the first player in the Open Era to win the same grand slam on 10 separate occasions.

Nadal climbs to second spot in the world rankings thanks to his triumph, which came without dropping a set throughout the tournament - the third time he has achieved the feat.

The 31-year-old, who also won clay-court competitions in Monte Carlo and Barcelona for the 10th time this season, will go down in history and people were lining up to praise him.

Here's the best of the social media reaction to Nadal's latest brilliant performance in the French Open final, starting and ending with the great man himself:

What an amazing tournament for the king. Remarkable achievement @RafaelNadal    #RG17

Congratulations @RafaelNadal on your historic 10th @rolandgarros championship. You are an inspirational champion on and off the court.

Dear @RafaelNadal well done on your well deserved #Decima ...I haven't seen anyone play as strong & as good as you were today, ever ! #rg17

It is so cool to have played in the era of Federer and Nadal. The two greatest players of all time in the same era. Amazing. Congrats Rafa