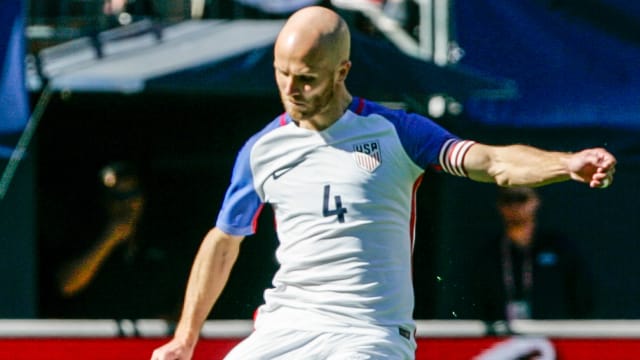 With political tensions high among the two nations, this was billed as the must-see international fixture of the weekend, and it did not disappoint after Carlos Vela cancelled out Michael Bradley's sensational opener at the Estadio Azteca on Sunday.

The Azteca cauldron was silenced when USA captain Bradley chipped Guillermo Ochoa from outside the penalty area in the sixth minute, though Vela restored parity before half-time in the fifth round - 'Hexagonal' - of qualifying.

Hector Herrera and Bradley both hit the woodwork in the second half as the points were shared on the road to Russia 2018, with Mexico improving to 14 points, six clear of third-placed USA after six matches.

Mexico were without key trio Andres Guardado, Miguel Layun and Rafael Marquez for the clash due to injuries. Juan Carlos Osorio, however, was able to call upon Javier Hernandez, Hirving Lozano, Hector Moreno and Marco Fabian after they were rested for Thursday's 3-0 win against Honduras.

Met with a chorus of boos as their national anthem rang out in a sea of green shirts, Bradley and USA silenced the home crowd early.

Hope you didn't tune in late to #USAvMEX.

In a dream start to proceedings, Bradley chipped Ochoa from distance for a sixth-minute lead, much to the delight of the travelling fans - the first USA player to score at the Azteca since Michael Orozco in August 2012.

Bradley's exquisite goal rattled Mexico, who struggled to keep possession as the Americans managed to dictate play and keep the Azteca supporters quiet.

It was not long, however, before Mexico settled and found some rhythm. Jonathan dos Santos going close to an equaliser, with his low effort flashing just wide of the post.

Hernandez also had a good opportunity in the 20th minute. The Bayer Leverkusen star sprung the offside trap following a delightful chipped pass from Vela and attempted to lob the onrushing Guzan.

Mexico did not have to wait much longer for the equaliser after Vela levelled proceedings three minutes later.

The hosts broke free on the counter-attack and with the Americans outnumbered and out of position, Hernandez played the ball out to Vela, who cut insight on to his right foot before firing low and hard past Guzan.

That goal made it an end-to-end affair, though Mexico ended the half strongest, despite losing Oswaldo Alanis - replaced by Jesus Gallardo - to injury.

The second half was a much more cagey affair, until Herrera and Bradley livened up the contest.

Both Osorio and Arena turned to their benches for the decisive blow, but it was a starter who almost broke the deadlock for Mexico with 19 minutes remaining.

After Vela drew a foul from Bradley in a dangerous position, Herrera's fizzing free-kick rattled the crossbar and bounced away to safety.

The woodwork also denied Bradley at the other end after the Toronto FC midfielder hit the post from long range.