Rinne ready to bounce back from forgettable game five 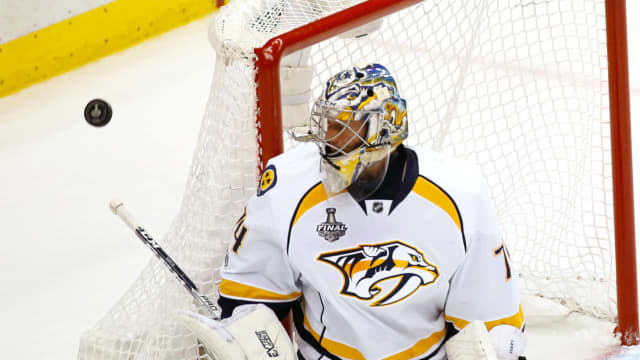 Nashville Predators goaltender Pekka Rinne and his team-mates are ready to bounce back in the NHL Stanley Cup Final.

Rinne was benched after the first period of game five, which defending champions the Penguins won 6-0 on Thursday.

The Predators goalie knows he must be dialled in against the Penguins in Sunday's game six for his team - trailing 3-2 - to stave off elimination.

"This is our opportunity," Rinne told reporters on Saturday. "And I think you try to do anything in your power and prepare the best you can for this one."

Rinne allowed three first-period goals on nine shots as the Penguins cruised to victory to take a series lead.

Backup, Juuse Saros, gave up three goals on 15 shots from the Penguins.

Rinne knows he has to play better as the series returns to Nashville, where the Predators were dominant while winning games three and four.

"You're playing in the finals, the biggest stage in your career, and you're not happy obviously," Rinne said. "But I never take it personally. It's not about me. It's all about us. I try not to take it personally. The reasoning behind it, I always believe that it's to wake up the team. Of course sometimes if I'm not getting the job done, it's better to put the other guy in."

After getting pulled in his last two road starts, Rinne admitted to having doubts after getting dragged on Thursday.

"Of course you have those thoughts, 'Why right now? Why pucks are getting deflected in off our guys?' or something like that," Rinne said. "You try to work so hard that the luck is also on your side. When bounces are not going your way, sometimes you... have second thoughts in your head. But that's life."

Even though he has not played well on the road in the Final, Rinne could still wind up as the Conn Smythe winner if the Predators can find a way to win the Cup.

But they have to win Sunday first, and then find some way to solve the Penguins on their home ice.

"Obviously they played a really strong game last game and beat us pretty bad, but right now there's no favorites," Rinne said. "We get to play at home. We get to prepare for this. It's just a one-game [situation]. Our mentality is going to be just taking care of this one game, and after that we have all the chances."