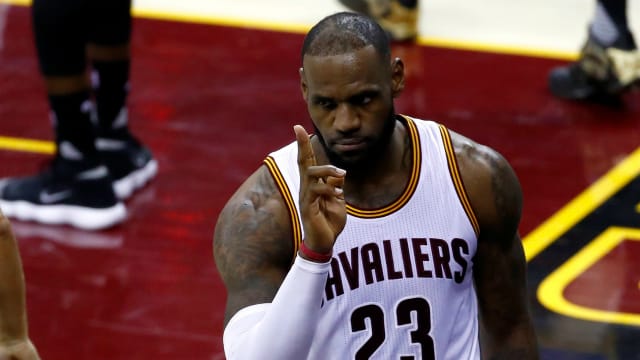 Defending champions the Cleveland Cavaliers lived to fight another day after beating the Golden State Warriors in game four of the NBA Finals.

The Cavaliers needed a record first-quarter effort to halt the Warriors 137-116 in Cleveland on Friday.

Facing the possibility of being dethroned by the Warriors on home court, LeBron James and his team-mates stormed out of the blocks to score 49 points in the first quarter and 86 in the opening half.

Both figures broke NBA Finals records, while the Cavs also made history with their 24 three-pointers in the game as they dealt the Warriors their first defeat in this season's playoffs.

The @cavs set an #NBAFinals record for points in a half (86). pic.twitter.com/puQY9xDfIn

The Cavaliers still have plenty of work to do but they now trail 3-1 in the best-of-seven championship series - a deficit they overcame in last season's Finals.

James led the way with a record-breaking triple-double - scoring 31 points, 11 assists and 10 rebounds.

He passed Los Angeles Lakers great and Hall of Famer Magic Johnson for most triple-doubles in NBA Finals history.

Congratulations to @KingJames of the @cavs on passing @MagicJohnson for the MOST triple-doubles in #NBAFinals history (9)! #ThisIsWhyWePlaypic.twitter.com/pa6PE23O74

Not to be overshadowed, Kyrie Irving put up 40 points, including seven three-pointers, while Kevin Love had 23 points.

Despite Kevin Durant's 35 points, the Warriors struggled in Cleveland. Steph Curry was four-of-13 from the field for 14 points and 10 assists.

Green was thought to have been ejected after recording a perceived second technical foul. But referees claimed that his first technical was on head coach Steve Kerr. That moment caused a long delay as officials tried to sort out the confusion.

Game five is back in Oakland on Monday.