Subban promises Predators will be better in game six 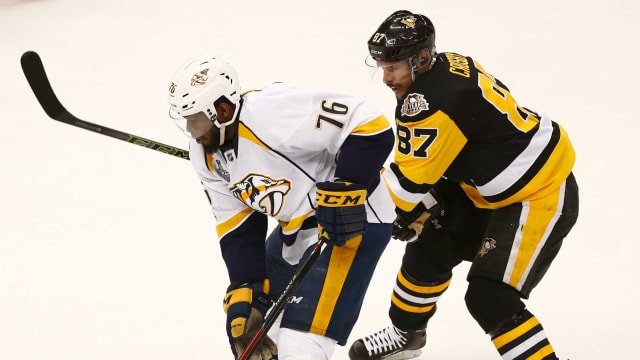 P.K. Subban has promised an improvement from the Nashville Predators against the Pittsburgh Penguins in the NHL Stanley Cup Finals.

Subban and the Predators were humbled 6-0 by defending champions the Penguins in game five on Thursday.

Facing elimination in game six, the Predators defenseman insisted his team will play better in Nashville.

"We will be better," Subban told reporters. "Our season is at stake. That's it.

"The real hockey starts now. You're in the Cup Final. This is what it's about. It's about going back and forth and back and forth.

"We've already parked the game and we're focusing on game six in our building and we know the energy is going to be there. We know we're going to play our best hockey and we're going to come back with an even better performance."

After dropping the first two games of the series in Pittsburgh, the Predators tied the Stanley Cup Final at two games apiece with a pair of dominant victories in Nashville.

Subban and the Predators' defence frustrated Sidney Crosby, who fought back with some questionably aggressive tactics in Thursday's win. Crosby did not score in the game, but did have three assists to lift the Penguins to a 3-2 series lead.

"You've got to give them credit," Subban said. "They executed. We didn't execute well enough to have success. We have to turn the page real quick and get ready for game six... We've got to focus on giving ourselves an opportunity to come back [to Pittsburgh] for game seven.

"I still feel we have a lot of great hockey left to be played here."