Stanley Cup Final: Penguins on cusp of repeat after clinic 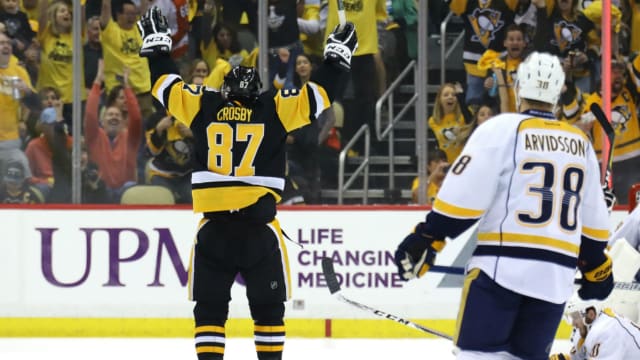 The Pittsburgh Penguins are a win away from a second straight Stanley Cup success after a 6-0 thrashing of the Nashville Predators.

The Penguins took a 3-2 lead in the Stanley Cup Final largely thanks to Sidney Crosby and the energised play of a few other previously slumping stars on Thursday.

The scoring started early when, on the power play, Crosby dished to Justin Schultz, who fired a shot from the point that beat Pekka Rinne just 91 seconds into the game.

It snapped a 0-for-11 slump for the Penguins' man advantage and was their first five-on-four goal of the series.

Pittsburgh went up 2-0 up five minutes later on a goal by Bryan Rust and Evgeni Malkin netted a backbreaker with 11 seconds remaining in the first period.

Though there were 40 minutes to go, Malkin's goal spelled the end of Rinne, whose Pittsburgh demons returned after allowing three goals on nine shots.

Meanwhile, the Penguins' key contributors came to life. Phil Kessel, without a goal since May 21, netted number eight these playoffs, just as Malkin predicted.

Conor Sheary and Ron Hainsey also scored in the second period as Pittsburgh put the game out of reach. Malkin, Crosby and Kessel combined for eight points in the victory.

Matt Murray also was stellar in net for a 24-save shutout, the third time in Cup history a rookie goalie blanked his opponent.

Ron Hainsey, Penguins - If Hainsey scores, you know it is going to be good. He of four regular-season goals netted his second of the playoffs in the second period, giving the Penguins their 6-0 lead. He also assisted the third goal for his first multi-point game since February.

Phil Kessel, Penguins - Kessel returned to form with a goal and two assists.

Sidney Crosby, Penguins - The Penguins fed off their captain from the get-go and Crosby finished with three assists, the 56th multi-point playoff game of his career.

Crosby and P.K. Subban got into a wrestling match toward the end of the first period. It all started when Crosby gave Subban a whack in the back with his stick while Subban navigated toward the Pittsburgh net. The two fell and Crosby pinned Subban down, repeatedly bashing his head into the ice. Subban was not a saint either, though, as he placed Crosby into a headlock as the two rose to their feet. The ordeal resulted in two-minute holding minors for both men, who headed for the locker room with 1:32 remaining in the period.

Malkin scored on the resulting four-on-four to give the Penguins a 3-0 lead heading into the first intermission.

On the tape-off the tape. @malkin71_ rounds out a huge first for the @penguins. #StanleyCuppic.twitter.com/swcaHh37tb