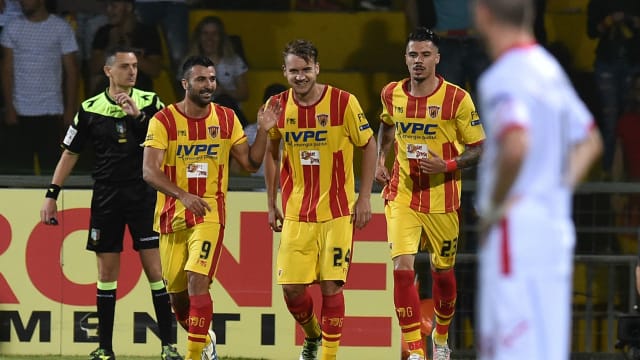 Benevento secured promotion to Serie A for the first time in their history with a 1-0 win over Carpi at Stadio Ciro Vigorito on Thursday.

After a 0-0 draw in the first leg of the Serie B play-off final, George Puscas' first-half strike proved decisive to send them into the top flight alongside SPAL 2013 and Hellas Verona.

It is a second successive promotion for Benevento, who were founded in their current form in 2005 and finished the regular season in fifth.

Inter loanee Puscas fired into the roof of the net after 32 minutes when he was picked out at the near post by wing-back Lorenzo Venuti, who did brilliantly to get past his man and drive in along the byline.

4 - Benevento are the 4th side from Campania to have been promoted to Serie A after Napoli, Salernitana, Avellino. Surprise. #BeneventoCarpi

Nicolas Viola came close to adding another after the interval, but his ferocious 25-yard strike cannoned back off the upright with Carpi goalkeeper Vid Belec nowhere near.

One goal proved to be enough for Benevento, with a raucous crowd sent into raptures at the final whistle.