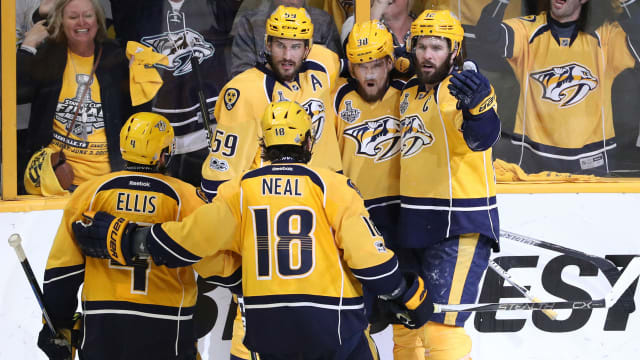 The Nashville Predators levelled the Stanley Cup Final against the Pittsburgh Penguins with a 4-1 win on Monday.

The Predators again fed off the unmatched energy of Bridgestone Arena to beat the Penguins and even the series at 2-2 as it returns to Pittsburgh.

Unlike Saturday when an early Penguins goal ever so briefly silenced the crowd, the Predators struck first when Calle Jarnkrok scored with five minutes, nine seconds remaining in the first period.

Pekka Rinne resembled the Conn Smythe contender he was billed as before the series, adding 23 saves to improve to 9-1 at home in these playoffs.

Rookie center Frederick Gaudreau, with 11 NHL games and no goals to his name before the series, scored his third of the Final, the only Predators player to find the net more than once against the Penguins.

That goal, which came 3:45 into the second period, stood as the game winner, Gaudreau's second in three days.

Viktor Arvidsson, Predators - Arvidsson's breakaway goal was his first since game four of the first round, snapping a 15-game goalless slump.

Pekka Rinne, Predators - For all the talk of Rinne's struggles before the weekend, he stopped 23 of 24 shots in Nashville. What a way to bounce back.

For Rinne's best act yet, he stopped a flurry of three shots in a span of three seconds midway through the second period to preserve what was at the time a 2-1 Predators lead. His last was the most jaw-dropping as he lunged into the crease to stop a puck inches from the goal line.