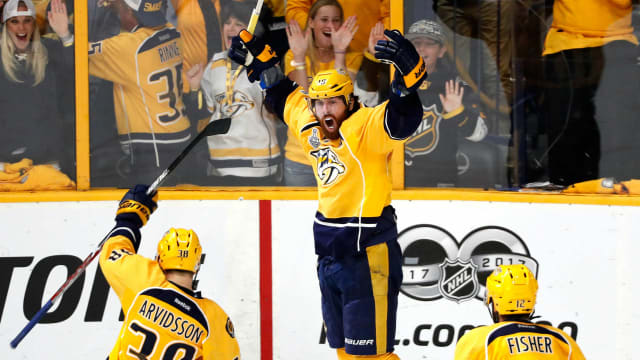 The Nashville Predators reduced their NHL Stanley Cup Final deficit against the Pittsburgh Penguins with a 5-1 victory in game three.

With two unfortunate losses in Pittsburgh behind them, the Predators returned to their country confines a rejuvenated bunch and hit back on Saturday to trail the defending champions 2-1 in the series.

When Jake Guentzel scored this 13th goal of the playoffs and fourth in three games just 2:43 into the first period, the Predators were on their way to a near-insurmountable 3-0 series deficit. It temporarily silenced the crowd, but that did not last long.

A struggling Pekka Rinne - 0-7-2 all-time against the Penguins with a .778 save percentage in two Final games so far - had the boisterous crowd in his corner and came through with a number of big saves to get to the first intermission.

Roman Josi tied the game 5:51 into the second period and Frederick Gaudreau scored 42 seconds later to send the arena into a frenzy.

Finally, having outshot and outplayed the Penguins in game ones and two with little to show for it, the Predators' labour bore fruit.

They won the shot battle again 33-28 and kept the Penguins' lethal power-play off the board in three chances.

Game four is back in Nashville on Monday.

James Neal, Predators - Neal's 14th career playoff goal with the Predators tied team-mate Filip Forsberg for most in franchise history. His goal late in the second period gave the Predators all the momentum they needed heading into the final stanza.

Roman Josi, Predators - Josi was on ice for three of four Predators goals, scoring the first and assisting on the second and third. He also led the team with six shots on net. He is the first defenseman with three points in a Cup Final game since Duncan Keith in 2010.

Pekka Rinne, Predators - With a pre-game standing ovation and countless "Pekka! Pekka!" chants, Bridgestone Arena made clear it had not lost faith in the struggling goalie. Rinne shook off an early goal that could have broken his already fragile spirit and delivered with his best game of the series by making 27 saves.

Craig Smith's clean breakaway 4:54 into the third period to give the Preds a 4-1 lead was the dagger.

A little breakaway beauty to add to the @PredsNHL total.

They're jumping on every chance in Game 3. #StanleyCuppic.twitter.com/Ctej9fM9U0