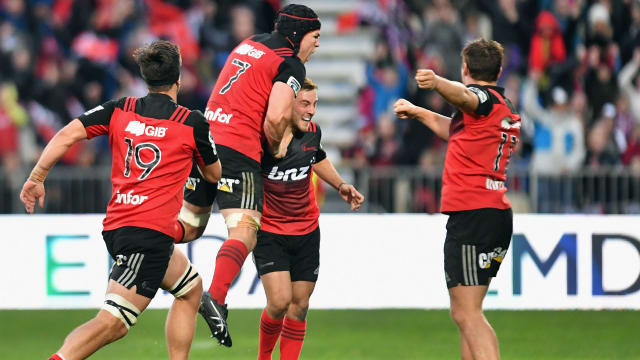 Mitchell Hunt landed a monster drop-goal in the third minute of injury time as Crusaders made it 14 from 14 this Super Rugby season with a dramatic 25-22 win over Highlanders.

Crusaders' perfect record looked like coming to an end at unlucky 13 when they trailed 22-19 with three minutes to go at AMI Stadium on Saturday.

Hunt slotted a penalty to bring the scores level, but missed with another effort from the tee as the end of the 80 minutes approached.

But from the restart and with the clock having gone red, Crusaders went through 18 phases before Hunt, under pressure from two attempted charge-downs, thumped over a stunning drop from beyond the 10-metre line to spark scenes of jubilation among players and fans alike.

What a game! What a derby!! What a crowd!! What a finish!!! #CRUvHIG#wewill#crusadeonpic.twitter.com/TSbEVuiEst

Crusaders had led 19-10 at the interval, a brace of Waisake Naholo tries early in the second period edging Highlanders ahead before Hunt capped a dramatic finale - the fly-half conceding afterwards he was surprised to see his effort go over.

"Wyatt Crockett turned around and said 'do something with it' and there wasn't anything else I could do," he said. "For a short player I can hardly punt it that far so I was pretty lucky with that kick."

In a tightly-contested New Zealand conference, Chiefs and Hurricanes continued their strong seasons with respective wins over Waratahs and Western Force.

Hurricanes ran out 34-12 winners over the struggling Force, but that result belied the story of the match.

The Canes were pinned back on their own line for long periods, and were only 17-7 ahead with the hosts continuing to hammer on the door, before three late tries in the space of five minutes gave the final result a deceptively lop-sided look.

Chiefs looked home and hosed when they romped into a 32-3 lead early in the second half, only for the Tahs to storm back and reduce the arrears to 39-31, before James Lowe completed his hat-trick to secure a 46-31 success.

"It would have been even better if we had been able to get a bonus point out of that. In patches we played pretty well but again the consistency in performance is letting us down," said Aaron Cruden.

FULL TIME: We take the victory 46-31 over the Waratahs in Beaver's 100th game! Fantastic support tonight - thank you #Chiefscountry. pic.twitter.com/MCutkWfKiT

Meanwhile, Brumbies - who announced this week that Dan McKellar will take over from the departing Stephen Larkham as head coach from next season - routed Rebels 32-3.