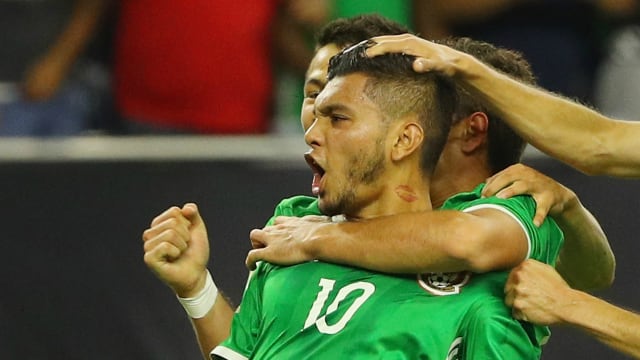 Mexico produced a dominant performance to ease past an understrength Republic of Ireland side 3-1 in Thursday's international friendly.

Jesus Corona, Raul Jimenez and Carlos Vela were on target for the Mexicans at MetLife Stadium in New Jersey.

Vela made it 3-0 in the 54th minute, while Stephen Gleeson reduced the deficit with his first international goal in his fourth appearance.

Inexperienced trio Carlos Salcedo, Jesus Gallardo and Jorge Hernandez were handed chances as Javier Hernandez and Miguel Layun watched from the bench ahead of the CONCACAF World Cup qualifier against Honduras on June 8.

The likes of Conor Hourihane, Callum O'Dowda, Shane Duffy and Daryl Horgan were named by Ireland boss Martin O'Neill, who was looking ahead to Sunday's friendly against Uruguay before their qualifying fixture against Austria on June 11.

Unlike previous international friendlies, this clash had a competitive tempo to it as both teams threatened early. Corona had a good chance to break the deadlock in the third minute but his effort flashed just wide of the post.

At the other end, James McClean tried his luck as Ireland pushed numbers forward but it was the hosts who opened the scoring in the 16th minute.

Mexico executed a counter-attack to perfection as Jorge Hernandez broke free following an Ireland corner and played the ball to Corona, who weaved his way past two defenders before cutting inside the area and curling his shot beyond Darren Randolph.

Irish duo Daryl Murphy and Cyrus Christie had attempts on goal but they were unable to trouble Cota.

Mexico then doubled their advantage eight minutes later via Jimenez from the penalty spot. McClean brought down Vela inside the box and the Benfica forward made no mistake.

That goal deflated Ireland, who struggled to keep their shape and retain possession as Mexico were unfortunate not to lead by more at half-time.

Juan Carlos Osorio rang the changes at the break and substitute Oribe Peralta made an immediate impact.

Peralta had his shot saved nine minutes into the second half but having been thwarted by Randolph from an acute angle, he squared the ball to Vela for the easiest of tap-ins.

Ireland managed to get on the board after Mexico failed to clear their lines, allowing Gleeson to pull a goal back with 14 minutes remaining.

The Irish almost netted a second in the 81st minute but O'Dowda was denied by Cota as Mexico bounced back from their 2-1 loss to Croatia.