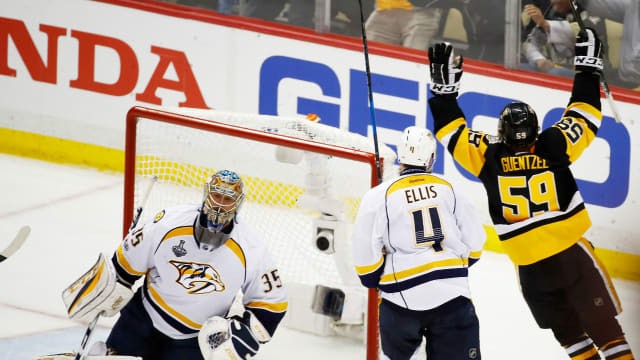 Outperformed for the balance of the series, the opportunistic Penguins blew game two wide open with four unanswered goals -- three scored 3:18 apart in Wednesday's third period -- to crush the Predators.

The Penguins now hold a 2-0 series lead in their bid for back-to-back titles.

After suppressing the Penguins into a historic low 12 shots in game one, the Predators again dominated scoring chances and outshot the Pens 32-19 in the first 40 minutes of game two.

Predators goalie Pekka Rinne allowed four goals in Monday's loss and ceded another suspect shot early when Penguins rookie Jake Guentzel snuck a puck short side between Rinne's glove and pad to tie the game 1-1 with 16:36 gone in the first period.

Rinne seemed shaky, but stopped the next 18 shots he faced until Guentzel scored again 10 seconds into the third period.

Off the opening faceoff, Bryan Rust carried the puck into the attacking zone and fired a shot that deflected off Rinne's pads and into the slot.

Guentzel, who was trailing the play, found a juicy rebound for the taking and buried it into the yawning crease, giving Rinne little chance to get back in time.

Scott Wilson scored the Penguins' third goal with 3:13 gone in the third and Evgeni Malkin made it 4-1 just 15 seconds later, chasing Rinne, who has allowed nine goals on 37 shots in the first Cup Final of his career. The 34-year-old veteran was having a historic postseason before this series, but something clearly has him shaken.

Matt Murray, Penguins - Murray was out of work much of the third period as the Penguins blew the door open, but his stellar play in the first 40 minutes set the stage. He made 37 saves for the 20th playoff victory of his young career.

Jake Guentzel, Penguins - A pair of goals gave Guentzel 12 for the playoffs, most in the NHL. With 19 points and counting, no US-born rookie in history has scored more in a single postseason. He is two goals away from the all-time rookie record.

A couple suspect whistles (and non-whistles) irked both sides, including Predators superfan Carrie Underwood. The country music star and wife of Nashville captain Mike Fisher, already in hot water these playoffs for her social media thoughts on officiating, made it clear she felt the refs were out of line.

How was that not a penalty?!

This game is being called so insanely awful, I can't even...

Just told my manager that she might have to lock me out of my own twitter! #PredsPride#IJustLoveMyHusband