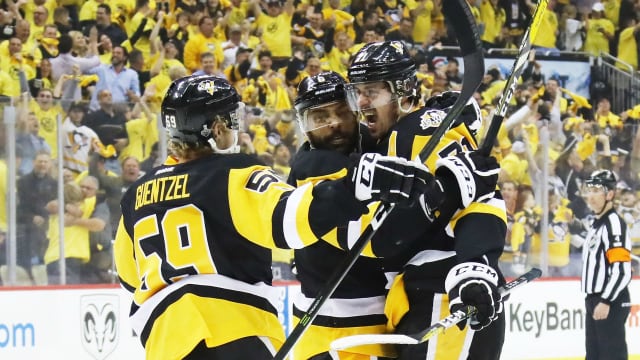 Reigning NHL champions the Pittsburgh Penguins drew first blood in the Stanley Cup Final, surviving to beat the Nashville Predators 5-3 in their opener.

Jake Guentzel scored with just over three minutes remaining broke a tie against the Predators in Pittsburgh on Monday.

Pittsburgh's 22-year-old rookie sensation was in some kind of scoring funk himself, having gone eight games without a goal since piling up nine in his first 11 career playoff games.

The Penguins could not muster one shot after Nick Bonino scored to make 3-0 1:02 before the first intermission. It was now the third period, the Predators rode a catfish-induced rally to tie the game, and Mike Sullivan was baffled by Pittsburgh's inability to put a single, solitary shot on Pekka Rinne in exactly 37 minutes of gameplay.

The @PredsNHL are the first team to hold an opponent to 0 shots in a period in #StanleyCup Final since NHL began tracking SOG in 1957-58. pic.twitter.com/uvInUXUrQ4

Frederick Gaudreau - the Predators' own rookie hero - netted his first-career NHL goal with 6:31 to play in regulation to erase a three-goal deficit.

Less than three minutes later, Guentzel corralled a loose puck in the neutral zone, burst into the attacking zone and roofed a perfect wrister over Rinne's glove to send PPG Paints Arena into a frenzy.

Guentzel's shot, somehow, was Pittsburgh's first in nearly two full periods. It stood as the game winner as Bonino added another to give the Penguins a 5-3 win of the most improbable variety.

Colton Sissons, Predators - Tasked with centring Nashville's top line, Sissons played about as well as one can expect. The game-six hero scored the Preds' second goal and fired a team-high seven shots on goal.

A pinpoint shot from the blue line by Predators defenseman P.K. Subban beat Penguins goalie Matt Murray 7:13 into the first period. On the surface, it appeared Nashville were off to an early lead. Pittsburgh coach Sullivan felt otherwise and challenged whether Filip Forsberg was offside as the Predators gained the attacking zone.

Upon further video review, officials ruled that was in fact the case.

As Forsberg corralled the pass, his left foot crossed into the Penguins zone while the puck remained on the blue line, negating the goal by a matter of inches, and seconds. Under strict interpretation of offside, it was the correct call, but that will not stop the debate over the coach's challenge to spill out on the NHL's biggest stage.

Explanation of Coach's Challenge at 7:13 of the first period in the @PredsNHL/@penguins game. #NSHvsPIT#StanleyCuphttps://t.co/Hqxl2l2Ehi